The video games that we love wouldn’t be the same if everyone got along. It is the conflicts that drive the narrative and causes us to keep plugging away in order to find some sort of resolution. Simply put there needs to be evil for the good to prevail over. Here is a list of the top 5 villains in video games that represent that very concept.

King Koopa is an icon of the industry, a classic as it were. Since the 1980’s, Bowser has been completely obsessed with kidnapping the Princess and trying to take over the Mushroom Kingdom. Were this list simply based on persistence and not success he would find himself at the top. Additional points are being granted for his willingness to take a break from his evil doings and take up a golf club, tennis racket or even get behind the wheel of a go kart in a multitude of side games. Also, while I hate to bring up the terrible live action movie, it should be noted that the legendary Dennis Hopper played King Koopa, not many other villains can say that.

Villains often have motivations for their actions that are based on perception. They actually believe that they are doing something right and are blinded by the means to their end. Kefka Palazzo is not that disillusioned. He knows that he is out to destroy the world and admits that he is doing it just for the sake of watching people suffer. To this day I can still imagine his signature laugh which seemed to act like an evil punchline used to emphasis one of this cowardly deeds. Kefka was not one to get his hands dirty; he would act from afar by sending in henchmen or poisoning water supplies. He displayed that his true power came from his demented mind.

3. The Joker (Almost every Batman game) 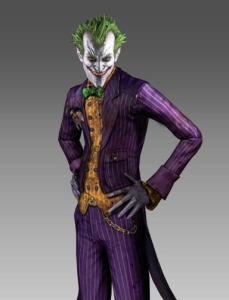 While it might be considered cheating to include a character that was established outside of video games, once he showed up on the digital platform, he was there to stay. Appearing in dozens of games opposite the Caped Crusader, unlike Bowser, he has never once joined the good guys for a game of bocce ball. He has one singular purpose and that is to cause as much mayhem as possible. Much like Kefka, The Jokers main weapon is his mind but he has also shown that he has no problem getting his hands bloody. I cannot recommend enough the Arkham games that Mark Hamill lent his voice to the character for, they are great examples of just how much villainous personality someone can infuse into a character.

Wesker displays the least personality of any character on this list and he does so for good reason. He wants his foes to stay in the dark about his plans and to ultimately let his actions do the talking. His first appearance is as your S.T.A.R.S. captain in the original game who is disciplined and appropriately distant. As the series moves forward you discover that he is a smart adversary who values Intel as well as brute force. When his efforts to replace human kind with genetically superior beings fail he takes things into his own hands and experiments on himself. There-by creating, through his own actions, a physically dominant foe who strikes with the cunning of his intellectual prowess behind each swing.

There is a lot that can be said about a villain who is so crazy and yet so charismatic that while you hate everything he does you don’t want to put a stop to him because you don’t want it to end. That’s exactly how I felt about Vaas when playing Far Cry 3, yes he is a pirate and a murderer but every time he appeared on camera I was eager to hear what he had to say.  He is only in one game but in my mind he defines the entire franchise. Ubisoft must know this as they have since tried to recreate the success with Pagan Min in Far Cry 4, to mixed results. Just listen to Vaas’ speech about the “definition of insanity” and you will see why he is the most memorable villain in video games.