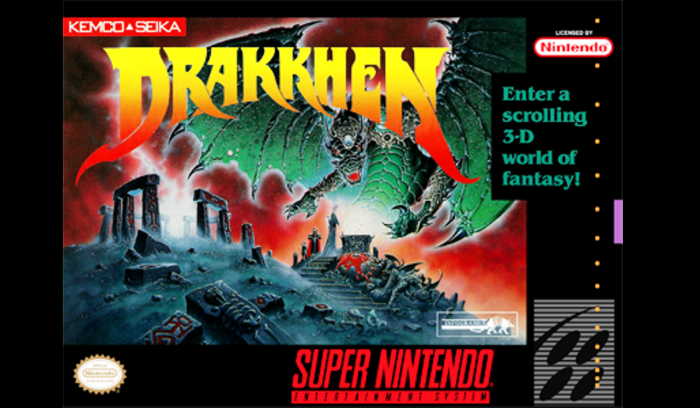 Do you like open world exploration, beautifully rendered 3D landscapes, realistic swimming animation and hardcore dungeon delving? Perhaps you’re a fan of dragons, an epic day and night cycle, and walking against every corner of every room spamming the interact button hoping to find long lost treasure. Hope I’m talking about Skyrim? You’re not the only one. Instead, let’s go back to the golden age of SNES RPGs and not play one of the games that contributed to that glorious era. It’s time for Drakkhen: Prepare to die edition.

I’ll start with the good.

OK, now that that’s out of the way, let’s get to what made this game the RPG that as children made us say, ‘really, I’d rather just go outside and play.’ Graphics…this game has them. 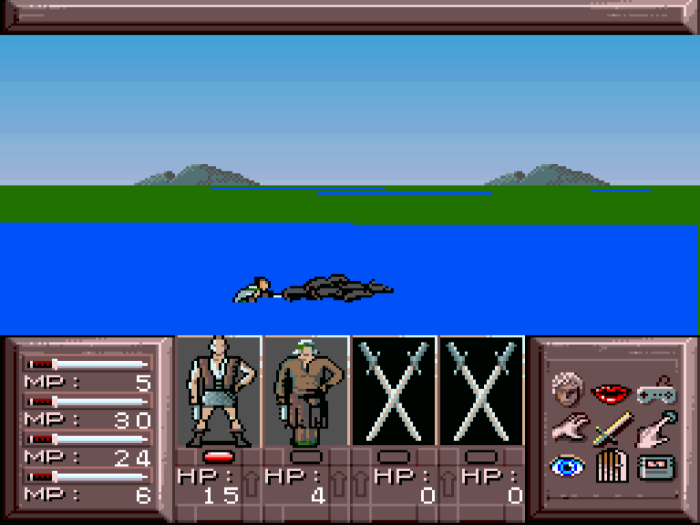 What, you want more detail? Well so do I, but I guess you’re the only one who will get what they want. The game starts with a character creator… almost. You get to choose your character’s gender, I think. You have the option between slenderman with long hair, or short hair. There’s no detail, so let your imagination run wild, you’re really going to need it playing this game, as it’s only downhill from here. Drakkhen gives you the sense that you’re playing a 3D game in first person, but it is so flat and bland the effect is completely lost. You begin to fear blue rectangles quickly, because the only thing you achieve by moving over one is dying. Either you can hold your breath no longer than five seconds, or that’s blue lava. Don’t worry though, the colour blue quickly becomes the least of your worries because in this game you will suddenly come across something that destroys you on a regular basis. This game isn’t about randomly dying to something, it’s about randomly being allowed to live to take another step. Your death is written in the stars.

Not that you’d know, because looking at the stars kills you. No, I’m not making a joke- you look at the night sky, and it will come down and kick your ass. At the very least, the monsters that plague the land tend to be the coolest looking things in the game, and there is some major variety there. If you ever want to just enjoy a night of dying, you could spend an hour being mercilessly slaughtered and never die in quite the same way. In a sense, dying is the most enjoyable part of the game.

Weird sounds and sometimes music. I wish I could leave that as the total discussion of the game’s soundtrack. I’ll explain further though. Sometimes you get to listen to music, but it goes away during fights and is replaced with weird sounds. Sorry, there’s really nothing more I can say here. If you play the game, you will know exactly what I mean.

So, that leaves us at the game play. This is where you could possibly expect to hear me say that the graphics and might be loosely described as soundtrack don’t make up this game, and despite it all the combat and the dungeons make up for it. If that is what you want to hear, this is a good place to stop reading the review.

The most interesting thing about the dungeons is that you can split up your party to explore the dungeon separately. This also means you’ll potentially run into enemies while by yourself which is a pretty bad idea. With luck, the enemy will decide to run away, which never really made sense. Even on the overworld, something will swoop down, kill half your party then turn tail. The dungeons don’t throw any massive surprises at you, and while a challenge to both navigate and complete, they’re comparatively fair and reasonable to complete if you went to them in the right order- and the game does give you enough direction to achieve this, through a mixture of poorly translated conversations and the difficuly of that area’s overworld- if you’re in a place where only a majority of enemies destroy you, you’re probably going in the right direction. While the old school menu for doing everything from observing to talking to… touching… is a bit of a hassle to use, you do get a decent amount of non-combat interaction within dungeons, and exploring them is not too bad.

Unfortunately, the game has combat. I specifically am saying the game has combat because I mean it- you don’t get to participate; the game instead lets you watch how much fun it is having. Battles consist of your team swarming like bees all over whichever enemy has shown up. You can choose spells to cast, and control one of the four party members, but I use the word control very lightly. If you move to an enemy the game might decide your character is attacking that enemy, maybe. It might also decide to start wandering off instead, forcing you to regularly be fighting the controller to move to the place you want to be in. 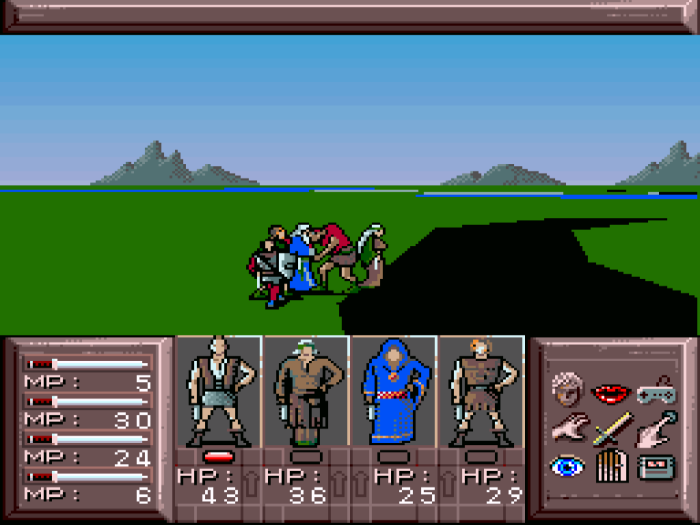 That’s right- during combat you get to control only where you move to, but even that is poorly done. Sometimes I like to just walk away from the fight and wiggle around in the corner, like I’m dissing the game- how are you enjoying your combat without me game?! That’ll show it.

This game is an RPG, but you may notice I haven’t said anything about the story.

Well, that’s all I have to say about Drakkhen. It’s basically SNES Skyrim, frankly I think this should count as my Skyrim review and I should get paid double. The only difference is that what Skyrim calls ‘unintentional bugs’, Drakkhen calls ‘design choices’. I wish I had at least one good thing to say about the game.

I know! It has multiple save files. I think I just scraped through the barrel’s bottom.