Super Mario World is one of the greatest 2D platformers of all time, a statement that rings so true that it is almost an objective fact. That being said, I cannot recall a time that I was ever playing it and thought to myself “wow, this game is great but what it really needs is…geography.” Obviously that seems silly; however someone important enough at Software Toolworks actually had this thought and as a result Mario is Missing exists.

This wouldn’t be the first or even the last educational game to try and profit off of the license, but as children we didn’t know the difference. We saw ‘Mario’ in the title and based on our past experiences we were duped into purchasing it, that’s the only reason it’s in my collection. The person I actually feel the worst for is Luigi, this was his first ever starring role and even though it is implied that Mario isn’t around, Luigi doesn’t even grace the title of his own game. I can only imagine that the poor reception for this game attributed to the fact that it wouldn’t be until 2001 that Luigi would get another crack at center stage with Luigi’s Mansion for the GameCube.

Let’s take a quick look at the graphics of this title, as they won’t take much to go over. Many of the Mario assets such as Luigi, the Koopas and Yoshi all look like they did in Super Mario World because they were. Anything that could use the same animations was essentially copy and pasted straight from the Nintendo title. If something had the unfortunate displeasure of requiring original animations, like Prince Toadstool or Bowser who looks like he was traced crudely from a magazine by a third grader, they not only looked bad but don’t fit in with the rest of the game at all. As for the background settings, they are at least servable and nothing is glaringly wrong with the attempt to replicate real world imagery into the cartridge. If there is one thing that I can give this game some credit for, it’s that the map of our Earth that Yoshi traverses looks pretty cool being redone using the Mario World style.

In regards to plot, Nintendo has never really been good at fleshing out the motivations of Bowser’s diabolical plans. Leave it to another developer however to completely blow them out of the water when it comes to absurdity. In this game Bowser plans to flood the earth by melting the polar ice caps with a series of hair dryers and needs to steal valuable items from around the world in order to fund his scheme. Scratching your head yet? It’s probably because, like myself, you played the SNES version which only hid the story within the instruction manual almost as if to say the developer knew it wasn’t good enough. When the game is actually booted up you only see Mario fall through a trap door into a pit and Luigi is on his way. Let’s all ignore the fact that Mario has foiled Bowser on numerous occasions and that this time it just took one fall for him to be kidnapped. Upon entering Bowsers castle, Luigi sees a series of doors that lead to the destinations of the game and somehow knows exactly what he must do, which is where the gameplay hits and you take over.

Levels consist of two objectives, recovering the locations stolen items and finding a way to get back into Bowser’s castle. The latter is done by talking to the locals to figure out where you are and then moving Yoshi to that location on the map so that he can scare Pokey the cactus away from blocking the exit pipe. It’s not overly difficult to figure out where you are but if you are having difficulty you can just trial and error the destinations on the map until you happen upon yours. It’s not overly educational or even fun come to think of it.

The first objective of finding the lost items however is…well not fun either. Bowser needs them to fund his plan so he does the best thing possible and sends the koopas, criminal masterminds that they are, to steal them. The issue is that these geniuses also seem to have no method of returning to the castle so they do the next best thing and roam around aimlessly waiting for you to thwart them. In fact, they are so useless they don’t even fight back, Luigi can walk back and forth near them and they will never break stride or even do damage to him. Yup, they can’t hit you and as a result you can’t lose. This game ends when you win or you turn it off because you lost your patience. After you jump on the defenseless koopas you need to pick up the items. Do you just run over them? Nope, for some reason you have to stand in the same square as them, in the background (a place Luigi is used to being brushed off to), and jump…whatever. You finish this pointless process off by attempting to return the stolen goods back to the kiosk vendor but they won’t take them. No, first you have to answer 2 trivia questions about the of the corresponding tourist attraction correctly. It’s your stuff, just take it! Turns out that by not being kidnapped for once Princess Toadstool found the time to be a true career woman and found a new way to be a burden to you by taking up the position of the kiosk vendor for every tourist attraction in every city you visit. 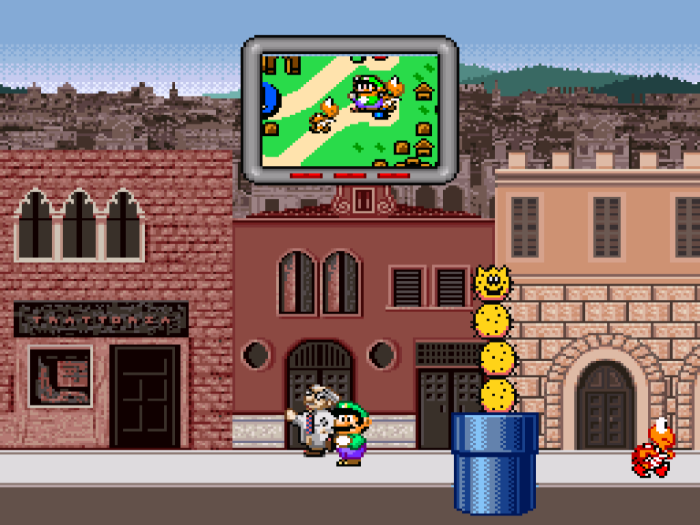 Once you have exerted your brain with all of this amazing detective work you will be greeted with a boss battle. The thrill of high pace combat is quickly dissolved by the realization that the Koopa Kids you battle are in fact, koopas by nature themselves. They suffer from the same combat prowess of their smaller dumber counterparts and will just run back and forth, albeit at a faster pace, hoping that you will decide that it’s just not worth your time. After jumping on them a few extra times the battle is over. Bowser finally appears, only to be defeated in a cut scene that lasts 3 seconds and Mario casually walks up to you and the game is over, mercifully.

There is no other way to say it; this game should not exist as a form of entertainment or as an educational piece. Do not buy it. If you want to teach geography to a child, just buy them a globe instead. Ironically if you spin that globe, it will also turn out to be a more entertaining video game than this atrocity.