Have you ever had a game in your collection that you just can’t remember how it got there? No fond memory of unwrapping it one Christmas morning or an anecdote about stumbling over a great deal at your local game store. This is that game for me, it has been in my collection for decades but I couldn’t, for the life of me, tell you how it got there.

Let’s start with the graphics. It’s obvious from the second you pop the cartridge into your system that Capcom knew what they were doing. This is not an example of a game throwing together a few blue pixels and saying “that’s Genie!” No, when Genie is on screen you don’t need to be told, you can just tell because he actually reflects his big screen counterpart fantastically. Sure there is a bit of a drop off in the details but it would be impossible for a 16-bit game to mimic a movie made by hundreds of animators 100%. The same can be said for each of the characters, no matter how minor, and the locations in the game. 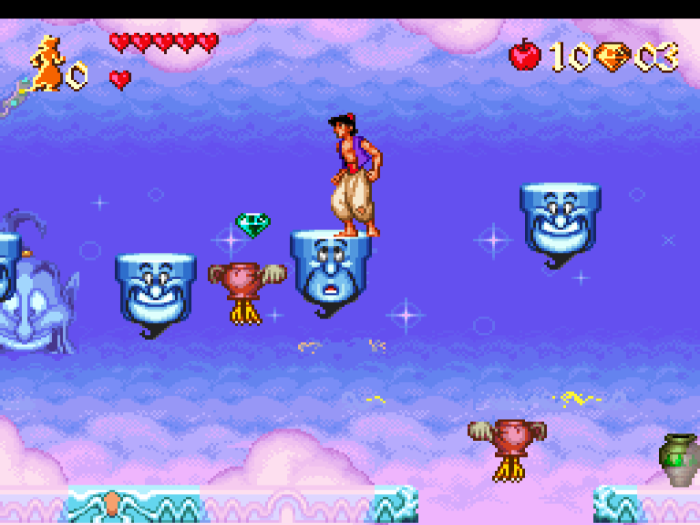 Speaking of locations, this game sticks to those you would see in the movie minus one single level that takes place inside of Genies lamp and is a bit off the wall. It is a welcome change from most movie based games that make up a whole bunch of levels and as a result alter the plotline. Sure the game expands on some of the concepts to make sure the levels aren’t as short as a movie scene but the main idea stays true. This means that not only do places like Agrabah, the Cave of Wonders and the Sultans Palace look like they should, you will platform your way through them in the same order they would appear in the film.

And platform through the levels you will. While I don’t like to compare other games within a review it’s inevitable that someone will have the Genesis version of this game in mind while reading this. There is no doubt in my mind that the Sega incarnation is a stellar title and arguably the better game but I don’t remember Aladdin progressing through the movie with sword in hand. The SNES version scores a few points for leaving the protagonist unaltered, by using apples to distract (not defeat) enemies, a sheet to glide and attacks that involve jumping on the enemies he more accurately reflects the film version as a clever acrobat and not a sword wielding brute. 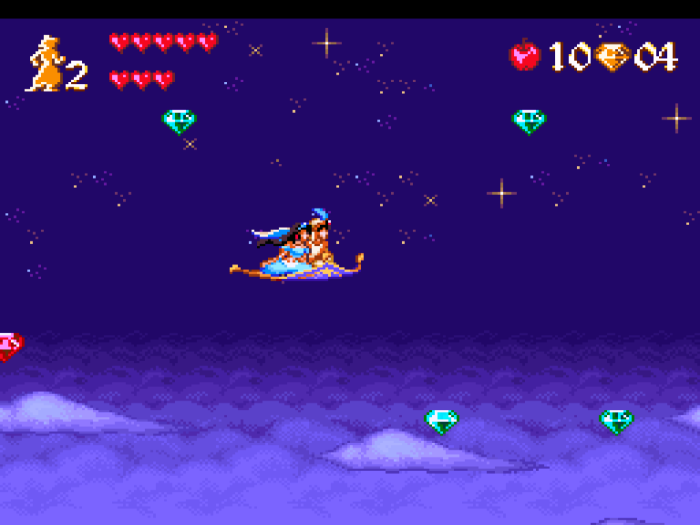 The controls in the game are absolutely spot on. You take control of Aladdin and feel like you can do all of his moves when they need to be done and as they are required. Parts of the game ask you to take control of the magic carpet in levels that scroll automatically. Deaths in these parts never feel as if it is because you don’t have the responsiveness that you need. On your way to stopping the evil Jafar, every slide down a clothesline, every leap over a fiery pit and every glide to grab a collectible feel like the controller is working with you and not against you.

It’s not to say that this game is perfect. There are definitely some negatives and those need to be addressed. Firstly the game relies on a password system. As a general rule of thumb, I am not a fan of passwords but luckily this is not a major issue because passwords consist of only 4 characters. ‘Characters’ is a great word for it since instead of letters and numbers the passwords are comprised of portraits of the actual characters. This is where I allow my walkthrough tendencies to shine and inform you that by entering the password Aladdin, Jasmine, Abu and Sultan you will start on the final level, you’re welcome.

This actually brings us to the other big issue in the game; you will not need that password. It makes sense that the game would be targeted to a similar young audience as the movie but even then it is very easy and as a result very short. There is no denying that when I was younger this game felt like it had so much more to it but at this point I was able to play through the entire thing in one sit in with a run time of only a couple of hours. This isn’t necessarily a bad thing but there are many games from the 16-bit era that were intended for children that still possessed a lot of challenge and work to fully accomplish. The only big achievement to be hunted is the secret ending and that only entails collecting a minimum of 70 red gems throughout. With no real indication that a secret ending exists you might not even go back to do that after your first playthrough.

Fans of the movie, regardless of age should not miss out on this adventure. The plot, levels and few bosses all feel like they are taken straight from the source. There is even a bonus level in which Aladdin and Jasmine ride on the back of carpet, where there are no enemies and you just collect gems while “A Whole New World” plays. Aside from a few very minor missteps, this is how a game based on a movie should be. I don’t know how this game ever got into my collection…but I am certainly glad it did.