I think we can all agree on two things when I start talking about Robin Hood on the NES. First; wait, there’s no way anyone made a Robin Hood game for the NES, but now that I think about it that sounds like such a good idea. Second; obviously Robin Hood’s a fox, it just wouldn’t make sense any other way. Much to my disappointment we’d be wrong. That’s right, Robin’s just some guy; he’s not in tights, he’s not wearing green, he looks nothing like Kevin Costner and most importantly he’s not even a freaking fox! That said, you’re here to read about a movie based game straight from the golden age of movie based games.

In case you missed the subtle suggestion, allow me to reassure you that movie based games are not simply terrible in the era we are currently in, they have always been that way, starting with ET on the Atari and ending with the latest ‘why oh why is Hannah Montana: The Movie: The Game even something I can mention in a review and not be completely making it up?’ piece of trash someone in the games industry decided fans would fork their cash over for.

That said, there are rare gems out there, and maybe one day I’ll even review one of them. 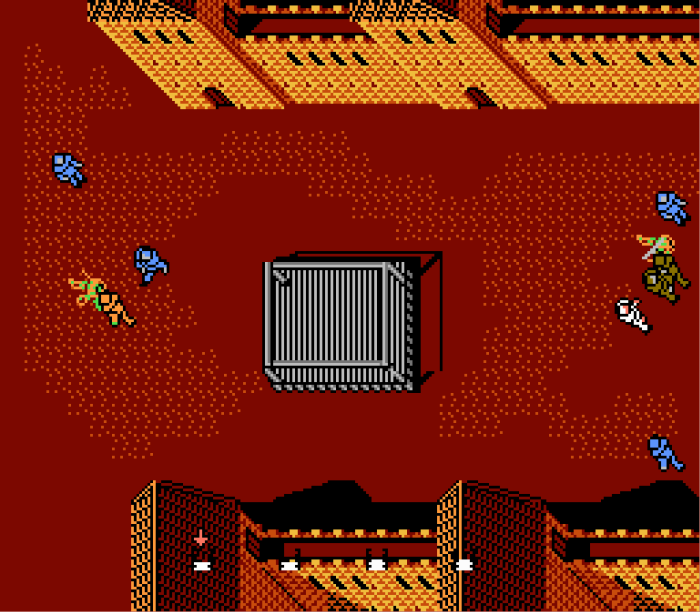 For now, back to… ugh, these backdrops are so brown. Guess I’ll start with presentation. Caves are blue, and outdoor maps are different shades of brown and sometimes green, I’m relatively certain most of the creatures you cannot identify are critters of some sort- insects and bats and the such- while wolves and boars stand out. It’s more than acceptable for NES graphically, and the contrast works well enough to know where enemies are- I believe the best way to describe the graphics is ‘functional’. Nothing wrong with that.

Backdrops can be a little inconsistent however- you can go under tree branches but not behind castle towers that clearly look like you should be able to, and there’s even an item you cannot reach because of this and you can get stuck and, well, have to restart from the beginning if you get trapped in what I can only logically assume is sticky glue while trying to edge your way through a tight spot. Some rocks you can walk over, others you can’t- but you do get used to this and it quickly becomes nothing more than a mild annoyance.

Interestingly, when you attack a wall, your sword is repelled, as if you are hitting something solid. Yes, yes, I know what you’re thinking ‘uh, duh’ and of course you’d be right. What I want to know is why this happens to include rivers. Does Sherwood Forest contain invisible walls around all its water? That wasn’t in the movie.

I’m nitpicking though, every game has its small glitches and for the most part those in this game don’t retract much from the game, it’s an original NES game after all so we know it could have been far, far worse.

The presentation isn’t bad- there’s semi-real looking portraits for characters that… perhaps look like NES versions of the movie characters. It’s a good ten years before realistic looking characters in video games even start to look half decent so I’ll give them an E for Effort. Perhaps the golden spot in the presentation is the use of multiple game play modes.

This game has four unique forms of combat. The one I have been speaking of most is the dominant form- a top down, hack and slash style not unlike Diablo, and for the time and system I have to give them credit for this. The second is almost like an RTS, wherein you get a broader overhead view, your teammates pop out of your not pants (explained later) and you all brawl with the dastardly Sheriff of Nottingham’s men. There is also two times where you ride a horse, and you will quickly realize you only get three lives before you must return to the start of the game during these parts as they are ruthlessly unforgiving. You also get duels, which like the horse riding are side scrolling, and consist of you and your enemy leaping over tables, jabbing each other and doing flying somersaults. I mean, you turn into a Samus ball and roll it’s quite astounding seeing someone wielding a long sword do this, perhaps they should be wearing tights after all.

My biggest disappointment is that I can’t use my bow in duels. The inability to duck and strike should also be mentioned, because it makes duels rather trivial once you figure out how to cheese them.

Speaking of cheese- the health restoration system makes no sense in this game. Adhesive strips for some reason are the weakest healing item, while bread is one of the strongest. Adhesive strips? Well, Band-Aid brand didn’t exist back then, but why do they look like something you’d put on your son’s scraped knee? What is undoubtedly the biggest travesty of this game, and I won’t question if it ends any desire to ever play it, is that meat isn’t the prime healing item. Everyone knows meat restores the most health, why else would the Belmonts spend so much time eating century old wall chickens?

You’d best get used to using your healing items regardless, because between blowing up endlessly respawning waves of enemies (I don’t know why they explode, don’t ask me) you never know when you’ll be drawn into a duel or RTS fight, and if you’re low health going into one of those you may well be screwed.

The combat is solid enough for an NES game, but due to hit zone it can be hard to hit enemies until you get the quarterstaff, which even as a child I had trouble understanding why a piece of wood was my best choice for weapon in a game full of swords, bows and even a morning star. Keeping enemies lined up is the worst, they bounce off you/each other like they’re curling rocks, you can’t attack diagonal except for with bows,  and enemies which can spam crossbows can prevent you from getting close in any direction- don’t crossbows need to be reloaded? 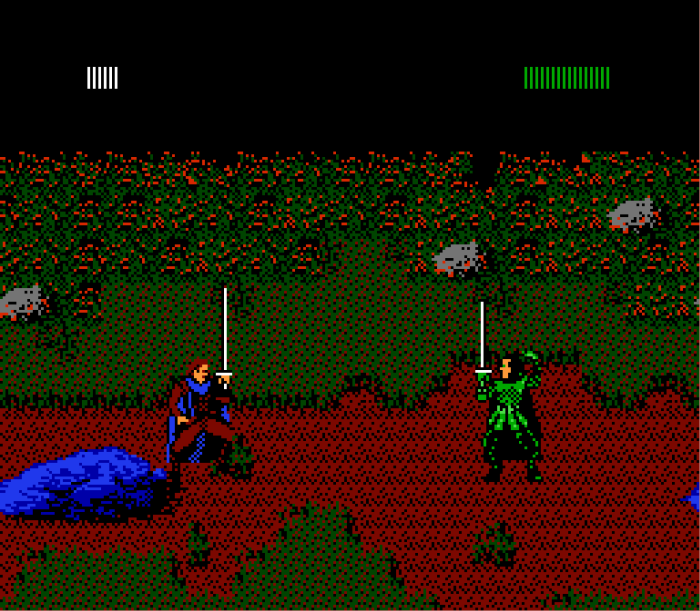 It seems like they went overboard with selection options- why can you search and look? You talk to people by walking into them, yet there’s a talk option- and this doesn’t let you talk to people who are behind a ledge yet only a few feet away, so why why why!? I can’t stab him either cuz ledges also repel my sword, so thanks useless guy on a ledge, I’ll never know what words of wisdom you had to impart. Why is there a use and eat option, can we not just assume using meat means eating it? What else am I going to do with an apple and a hunk of meat- y’know, nevermind I probably won’t like the answer.

There’s a head, pants and boots slot, just nothing to put in them. That’s right, you spend the entire game with your merry men, pantsless. I do like how you can’t use Duncan’s examine option, nice to see they thought of some of the small details, though he has no sense of direction- come to think of it why is he the one constantly telling me where to go, and why does Robin blindly follow his lead?

Speaking of gear slots. Logically, when you get a necklace you need to have on in order to meet the lovely Maid Marian, you put it on your head slot… nope- you have to take off all your clothing and wear that on the chest, that’s the only way the guard is going to let you into the castle, and remember- this game has no pants. The only way the guard will allow you through to meet her is if you are wearing nothing but a necklace that says you are- or have killed- Robin of Locksley. Could you imagine this being in the movie?… well, why wasn’t it? For once the game was the one to get it right. 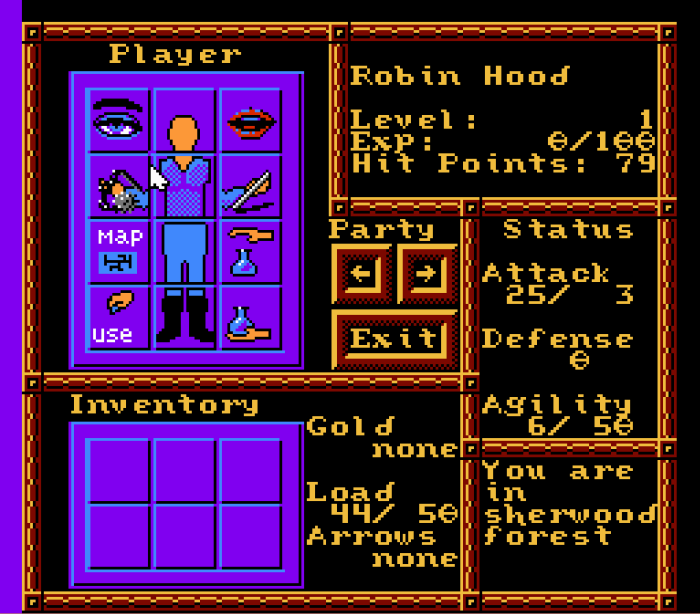 The game follows the story of Robin of Locksley well for a game, minus the not being a fox part, at the least everything part of the game seems to be something that reasonably could happen- you fight the Sheriff’s dastardly minions, alongside wild forest animals like boars and wolves. All reasonable enemies for the Robin Hood universe, enough so that I was this close to praising this game for being one of the few movie adaptations that was decently accurate… until I came across a giant skeleton. Thankfully, the right hand hag of the Sheriff is nice enough to tell you that you need a special weapon in order to even stand a chance against her super skeleton. Thanks old lady who wants me dead, you just saved my life because chances are very good I’d have spent three of them trying to fight that thing. Remember when Sauron looked at Frodo and was like ‘no stupid, you have to throw that ring in the volcano to kill me, now shoo and this time do it right’, that was my favourite part of the book, I’ll never forgive them for taking it out of the movie.

I suppose it should mention that you don’t steal from the rich and give to the poor, heck you can’t even use the gold you earn which effectively means you’re just hoarding. There are two spots where your gold is taken from you- a significant amount too… but these are to advance the story, which really just makes them gating, meaning you have to grind out gold if you don’t have enough at the time, what a garbage mechanic. Speaking of garbage mechanics… be very careful what you drop. You have limited inventory, but if you drop a quest related item while it’s still needed in an area you can’t get back to- that’s effectively game over for you, so sorry try again. You can even lose vital items when one of your party members leaves if it’s on him- I won’t tell you who departs, only that if you lose a certain precious dagger this way it’ll leave you blindsided.

With that, I leave you with some of the dialogue between our hero, bravely brave Sir Robin, and his arch nemesis the Sheriff.

“Being stupid seems to run in your family.”

“Well being dead seems to run in yours.”

Verdict on this game? It was fairly innovative and took some risks, it was functional in every area and didn’t really stand out as being horrible. It could be ruthlessly challenging at times, and not entirely in a fair way but that was the norm for the NES era, and as the game is only a few hours long at most that’s part of the longevity… though the getting stuck due to having dropped a vital item part is enough to piss anyone off. It’s an NES game, and without nostalgia or a desire to play an NES game there’s no reason to be trying this one out- but this isn’t a bad game either, just be prepared to hear the ‘you are dead’ tune a lot.

Heck, even if you ace the game on your first play through, you’ll get to hear it once. Spoiler alert- the game ends with you marrying Maid Marian… which plays the ‘you are dead’ music.