Take a group of normal teenagers and give them superpowers and giant robots in order to fight the forces of evil. That has always been the basic concept of the Power Rangers franchise that from the very moment of its creation was perfectly catered for video games. Over the years we have seen the Rangers star in a variety of games from action to racing. The problem with Mighty Morphin Power Rangers for the SNES in particular, is an identity crisis caused from not knowing which particular genre it wants to fit into.

I’ll get back to the issues with the game play later on. First, let’s take a look at the story:

That’s it, that one scene is all that you get, literally.

To be fair, if you are a fan of beat em up games or the Power Rangers in general that screenshot tells you all you need to know. An image of your nemesis being projected into the sky can only mean that there is bad stuff going on and you need to get into gear. That doesn’t change the fact that the developers really phoned it in on this one but I’ll give them this much, at least they gave the ending three times the effort. No, I’m not just throwing out a random number to be cute or for the effect, the ending actually has only three scenes.

After that edge of your seat thriller that is the story, you are taken to a character select screen which much like the intro has one glaring omission.

Where is the Green Ranger?

Tommy showed up in the show almost a year before this game was released. Normally this is not a big deal but it makes me wonder if the developers even saw the show or if they just quickly put out as a cash grab for a rapidly rising pop culture phenomenon. It doesn’t help that aside from the Putty patrollers and level bosses who were taken right from the first few episodes of the show, the Rangers find themselves fighting such iconic enemies as spiders and attack turrets.

The characters only really differ in their appearances, there is no difference in regards to stats or combat style so just pick whoever or whatever color you like and let’s dive into the gameplay.

When you initially take control of your selected character the first thought is that the movements are responsive and actually quite spot on. Proceed to take a few steps and attack whatever color of Putty this level possesses and you will see that the combat seems easy but overall serviceable. At this point if it hasn’t already sunk in repeat the last step two or three more times and it will dawn on you. 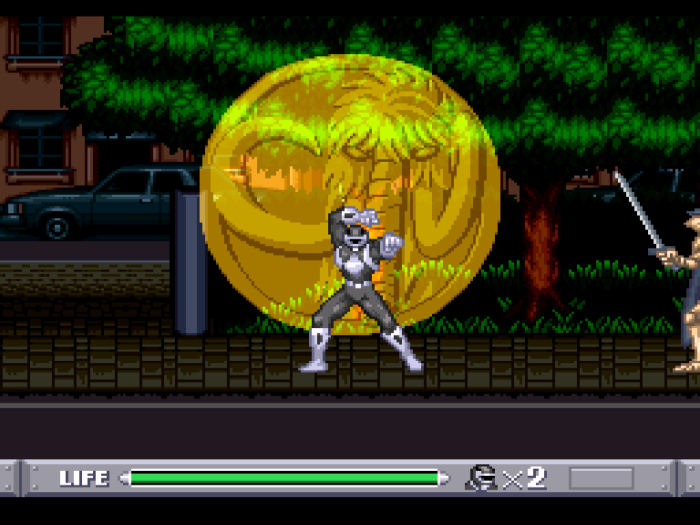 As solid as it is that is all there is to it, there is no hidden depth here.

The game has no combo system or co-operative mode which would seem to go hand in hand with the license and genre as a whole. There isn’t even a fore/background layout to maneuver around your enemies and employ any sort of strategy with. You are essentially playing a game where you run down a straight hallway, stopping every few paces to punch a Putty or two and continue on. Eventually you will reach a point in the level where the boss confronts you and you Morph. Don’t get ahead of yourself as he will leave and you will have to do another half of the level before you actually face him.

Here is where the identity crisis I mentioned earlier comes into play. As soon as you get over the initial shock and settle into the game for what it is, the second level will throw a curve at you in the form of very basic platforming. Much like the combat, it is not challenging and at most a nuisance if you miss one but all of a sudden, it’s there. It isn’t enough for the game to feel like a platformer, it’s just enough to try and break up the tedium. The developers utilize other such mechanics to mask the straight line, for instance, there are parts of levels that have traps that require you to pause for a second before you continue down your Putty punching hallway.

Now you may notice that I glossed over the actual boss fights. It is because these are actually well done and imaginative considering the restrictions the rest of the game places on you. You don’t gain any other sort of new abilities or attacks, that would be silly. Rather the bosses have new abilities and attack patterns like teleporting or standing on elevated platforms that make you actually do a bit of work. It’s a refreshing end to each of the levels.

If you feel like there is a curve coming, you are right.

The final stages of the game are just a series of boss fights. This may seem like a good thing based on what I just said however they employ a whole new genre again. There you are only a few levels away from the end of a very short game and all of a sudden you are playing a 2D fighter complete with health bars, an actual move set including projectiles and everything. They may try to justify this by saying you are now in the Megazord and it handles differently but no, just no. Much like everything else in the game it is serviceable and works perfectly fine but is some consistency really too much to ask for.

A quick note on the graphics and sound, they are perfectly fine. While at no point do they push the limits of an SNES cartridge, the characters are recognizable to their TV counterparts, levels are rendered with a bold and colorful pallet, and little else is as nostalgic as hearing that old theme song kick in on the start screen. You could do worse in this department.

I would be hard pressed to recommend this game to many people. If you are a Power Rangers fan or SNES fanatic you probably already have this one in your collection because of the name recognition alone and don’t need me to tell you about it. For everyone else, grab it if it’s cheap or if you know someone who has it, take an hour out of your day and run through it. Otherwise there are other games within the very same license that are actual 2D fighters or beat em ups that will be a lot more to your liking.