Back in the late 80s, my first gaming experience came in the form of a Commodore 64 home computer that my cousin owned. Many late hours were spent on it and thanks to all of the NES ports, we never really felt like we were missing out, except when it came to Super Mario Bros. Being a Nintendo property, the chances of the pudgy Italian plumber gracing any other platform were slim to none, with a margin of error of…slim.

Instead we had The Great Giana Sisters, a game so similar that the first two stages practically screamed mushroom kingdom. This supposed knock off did manage to find its own identity in following stages however, the damage was already done and rumors began to swirl of a copy write lawsuit that Nintendo had placed. You can only imagine my surprise that now, well over 20 years after disappearing off the face of the earth, I am reviewing a new entry into the series in Giana Sisters – Twisted Dreams. 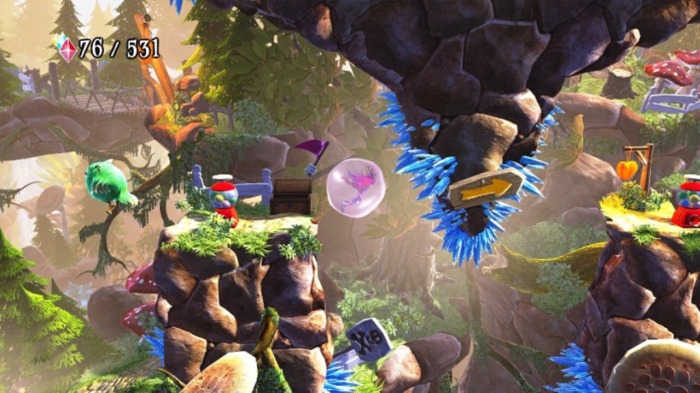 Let’s start off with the presentation as I absolutely loved it in this game. While the graphics are not industry leading quality by any means, developer Black Forest Games made the right call with a bold colour palette and unique atmosphere that is just a joy to look at. Details such as the backdrop changes when swapping sisters prove that simple, smart decisions can make a game just as enjoyable as a technically superior one backed with a big budget. Similarly, the sound effects and music just fit. I’m not looking for orchestra quality audio and the developer knew that. If picking up gems sounds right and the beat of a song matches the atmosphere in a level, job well done.

Jumping over pits, collecting gems and working from left to right in order to reach a levels end are not elements gamers will be particularly surprised by. That being said, like the presentation, there are enough original twists thrown in for the game to have its own identity. 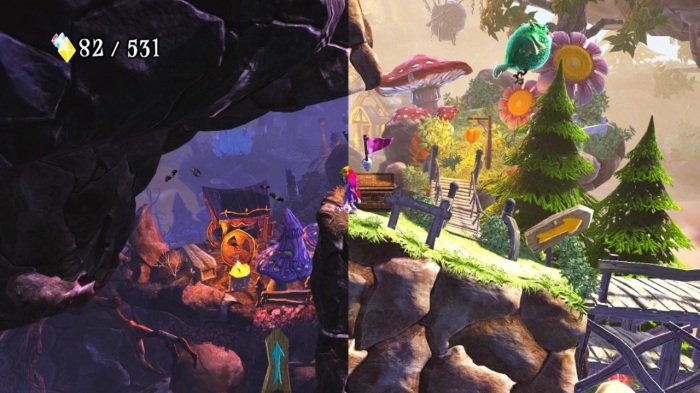 The most obvious of these is the mechanic of swapping sisters. Truth be told, it doesn’t have much of an impact on the moves that the characters can perform, as those are allocated to a specific button, and pressing it will automatically switch to the appropriate sister while performing the move. The biggest impact is actually on the environment and not in the sense of changing imagery. Depending on which sister you are controlling, elements of the levels will chance such as bridges disappearing, platforms moving in opposite directions or spikes appearing in your path. It ends up taking on an almost combo like system. You will come across many situations where you will have to start a cannonball as Maria and then in mid-flight, while still holding onto the move, swap to Giana in order to remove a barrier that would normally end in a collision. It is in this way that the game has infused a level of strategy, not often seen outside of boss fights, to the normal platforming formula.

That being said the game does still have its large, screen filling boss fights that require pattern recognition and strategy to defeat. They are just scarce in number, confined to the end of a world, such as is common for the genre. There is no shortage of the main staples here, you come across level specific power ups like bubbles you can float in, a rather lazy world map that is just linear and hundreds of gems to collect. 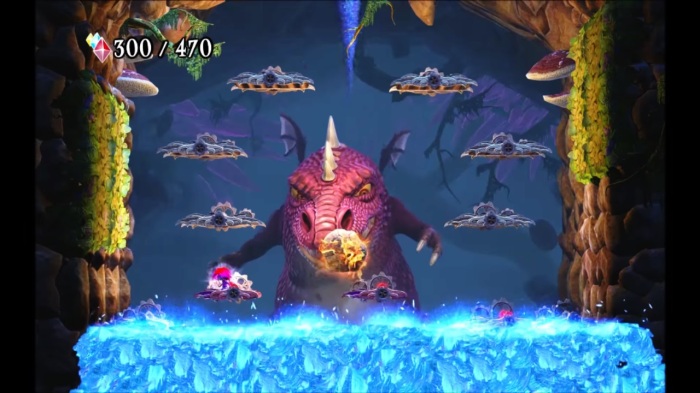 That last point brings me to one of my biggest complaints in the game. Collecting gems means nothing unless you are going for a completionist run.

What do we know about collectables in platformers?

Well, in Super Mario Bros for example, collecting 100 coins grants a free life. When playing Rayman, lums go towards a tally that unlocks additional levels and character skins once certain plateaus are reached.

Giana Sister has none of that.

With a generous checkpoint system and an infinite number of lives, as well as nothing in the way of unlockable bells and whistles, there is no motivation to look for the sometimes up to 700 additional gems in a stage. The one slight exception being, that the few large gems in a stage will each unlock a new art gallery entry but that is far from enticing to the majority of players. As such, I lost interest in the game much sooner than usual. It is not uncommon for me to replay levels in a platform game multiple times, even after beating it, in order to search every nook and cranny for secret rooms and collectibles. However, with Giana Sisters I just didn’t see the point and that hurts it because this genre was built on replayability. Even the additions of higher difficulty settings or modes such as time run and hardcore do not do enough to change the minute by minute experience.

While it might seem odd to put such a negative focus on this aspect, to me it’s a huge element of the genre. It’s not a deal breaker like poor controls would be, which this game does not suffer from, but rather a barrier that prevent a good game from bring great.

Lastly, there is a story but as you can expect, it’s just there. Maria has been captured and pulled into the dream world. Giana follows in after her to make the rescue. She does so within about 3 minutes of the game starting in order to allow the swapping mechanic to being and the rest of the way they are just trying to get back home. That’s about it.

There you have it. Giana Sisters – Twisted Dreams is a fun game but it just falls short in the key element of replayability. I was having a great time until the lack of motivation for collectables set in and I was just focused on beating the levels. That doesn’t mean that it wasn’t a good experience, it just means that it limits my recommendation of this game to people who are ok with a one and done experience.