Boss battles are often the most exciting part of playing video games. From Software is one of the few developers that excels at keeping the player’s eyes riveted to the screen during their challenging, imposing and remarkably designed confrontations. To keep this list from getting too obscure, I narrowed it down to the games that are commonly referred to as the “Souls” series. This includes Demon’s Souls, all the Darks Souls titles and Bloodborne.

Whilst simple in its design, anyone who has played Demon’s Souls will clearly remember their first confrontation with the Flamelurker. An arduous decent through the many twisting channels of Stonefang Tunnel will funnel you to the fog door leading to this encounter. Starting above in the mines (after defeating Armor Spider) and working your way down into this heated basement is cleverly foreshadowing what is ahead.  In contrast to the slower, oversized bosses that the player has likely fought so far in Demon’s Souls, the Flamelurker is a fast, tightly-packed ball of flame.  Being near him burns your health away. He charges mid-range targets with an explosive impact; often leaving flaming footprints on the ground. While weak to both magic and poison attacks, not many first time players made their character with those abilities. This made for a challenging, exciting, and memorable battle in the first game donning the Souls title. 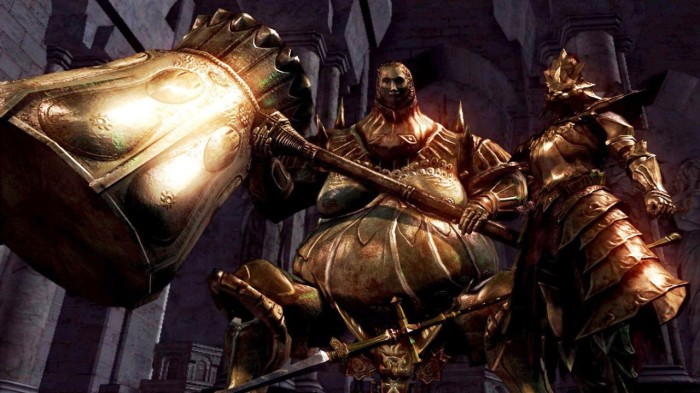 An unavoidable addition to this list, Ornstein and Smough are likely two of the most recognizable and famous bosses From Software has yet to create.  This encounter takes place after making your way through Anor Londo. A city famous for making grown adults cry due to its gruelling difficulty, “cleverly” placed enemies and unfortunately absent railings.  The duo must be taken on simultaneously, and the moment one of them falls the other absorbs their power and the battle begins anew. Ornstein is a Knight Captain and carries his Dragonslayer Spear which is imbued with lightning. Smough is the overweight executioner of Anor Londo who wields an enormous hammer. If Smough is defeated first, Ornstein prays to absorb his friend, doubling in size and retaining all of his speed.  Conversely, Ornstein falling first causes Smough to smash Ornstein with his hammer. He absorbs the power of lightning into his weapon and becomes an electric nightmare. Either way, this iconic fight is long and arduous. Overcoming it and leaving Anor Londo gives a feeling of accomplishment few games can offer players. 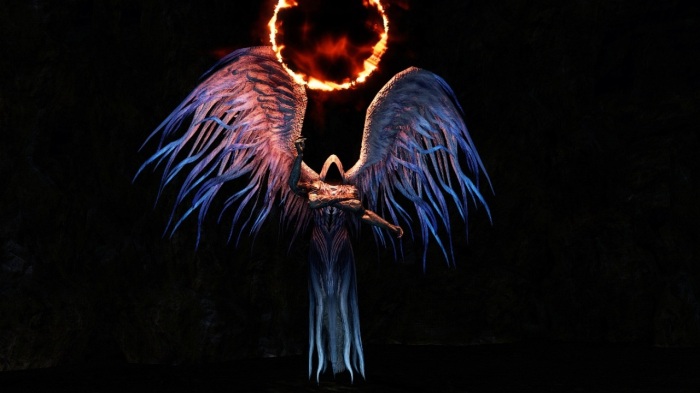 This boss was tucked away as the final challenge in the Pilgrims of Dark quest line. The player had to complete three fairly challenging dungeons that involved sacrificing a Human Effigy for every attempt. Your quest was to go thrice into the Abyss and light a large chalice with your torch to gain entry to the final area.  Darklurker is a four-armed, hooded angelic being that employs many different magic attacks. This exhilarating battle begins with Darklurker flying around the arena casting Soul Spears, Darks Explosions and Fire Orbs. The interesting part of this fight comes half way when she splits herself into two separate entities; both equally strong and able to use all abilities. Artistically interesting in character design, ability usage and environment, Darklurker is one of the cooler encounters (albeit not one of the most challenging).

Father Gascoigne is an unforgettable encounter that perfectly sets the tone of Bloodborne. After making your way through Central Yharnam, you find Gascoigne devouring a fresh corpse in a moon lit cemetery.  This hunter has been taken by the madness of the hunt and immediately attacks.  Sporting a Hunter Axe and Blunderbuss, Gascoigne fights just like the player does. Until, of course, he transforms into a terrifying beast. The battle rages on, tomb stones are destroyed and you emerge victorious. The setting becomes even more meaningful when the player discovers Gascoigne’s wife died in the cemetery, by his hands, just moments before. If the player visited his home prior to arriving at this encounter, you could be gifted with a music box that stuns Gascoigne in his beast form (The memories of what he has done to his family paralyze him). The themes of madness, blood and the retention of humanity flow throughout Bloodborne’s adventure like a fine wine; and this encounter encapsulates all of them.

The final encounter in the Ashes of Ariandel DLC is an incredible treat. Sister Friede interrupts your interactions with a restrained Father Ariandel, asking him to overt his eyes whilst she dispatches you. Casting large swathes of ice across the floor and able to disappear and attack from the shadows, Friede wields an enormous scythe and commands the power of frost. Not before long, Ariandel is enraged upon her defeat. He breaks free of his bondage, destroying and widening the room by setting nearly everything ablaze. Ariandel swings an enormous bowl filled with fire. Smashing it into the ground he spills dangerous liquid flame throughout the room. This fire brings Friede back for another round of combat, and both must be fought together. A tornado of fire and ice fills the room as both adversaries attempt to end your assault against them. Their health shared, they fall together. It is at this point where most celebrate and congratulate themselves on a well fought victory. I remember this moment well. Ariandel’s voice then echoes throughout the hall “When the Ashes are two, a flame alighteth. Thou’rt Ash, and fire befits thee”. A swirl of darkened flame swirls around the body of Friede, causing her to stand again! The final phase of this encounter is against “Blackflame Friede”. She now carries two scythes, moves with incredible speed and has the powers of darkness and frost. All of these attacks are as beautiful as they are deadly, and there is little time to counterattack before she begins another flurry of swings. This final phase is the most challenging and nerve-racking of this gruelling battle.

One thought on “Top 5 ‘From Software’ Bosses”