I will admit, Warhawk was fun when it came out but it had its problems. HUGE problems. It was buggy, it was only multiplayer (with a single player small tutorial) and it seemed to be missing something. That something was the pace of the game. It was slow. The matches were agonizingly slow. So how do you fix that type of a game? STARHAWK!

If you have played Warhawk, the idea is pretty much the same. You have a side with a bunch of teammates and your mission is to either kill your opponents or capture their flag (depending on what mode you choose). Starhawk is mainly a multiplayer game but this time around it has a single player campaign that lasts up to 5-6 hours. Trust me when I say, you will not care about the single player experience at all. If I could give you any advice, it would be to jump right into multiplayer and stick with it. The single player story is bland and is only important if you want a long, dragged out tutorial on how the basics of the game works but you can easily learn this in multiplayer within the first few hours of play.

Starhawk has a lot of fun elements to it including fast-paced gunplay, tremendous variety in vehicles and fun base-building elements. Starhawk is not a slow game at all. Everything is happening all the time and you need to stay on your toes to survive. It is a 32-player brawl on 10 large maps that you will quickly learn where to build and when to attack. The idea behind the game is to collect energy by either killing your enemies or by staying near your base. This energy can be used to build bases or vehicles. There is nothing more satisfying than building a Starhawk, flying it around and then landing it near a lone enemy (all while turning into a walking mech) and blasting the crap out of them.

How you start a life is very similar to how Section 8 did it.If you are just beginning the game or if you have died and are respawning, you begin in a pod up in space and you are shot down to the ground. You have control of where you are shot down and you even have a little bit of control as you are coming down which is nice. The awesome part is when you come down and land on an enemy because this causes damage and can even kill them.

When choosing modes you will most likely choose between death match and capture the flag (even though the latter is how the game is meant to be played). Placing the buildings and stopping an enemy onslaught from getting your flag is a joy and penetrating your opponents base in any way, shape or form is a great feeling of satisfaction. 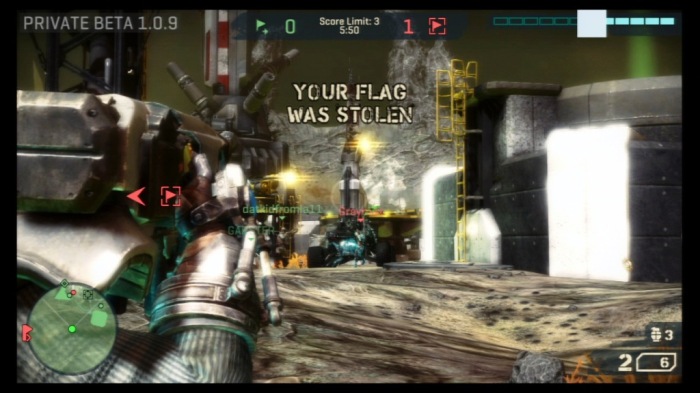 Overall, Starhawk fixed all the problems Warhawk had. It is fast, fun and visually appealing. The 32-player multiplayer experience keeps everything at a frantic pace and the maps are all unique and fun to play. Pick this game up only if you like online play because the single player is something to just toy with.