Orphan: These aren’t my teeth.

Deathspank: Whose are they?

This pretty much sums up the hilarity that ensues in the downloadable game DeathSpank. If the protagonist’s name wasn’t enough for you to snicker at, the entire game is full of quick wit and enjoyable humor. It is a good thing that this humor comes in bunches or else the game would be nothing more than fetch quest after fetch quest.

Being a Diablo’esque/Torchlight type of game – a.k.a. a dungeon crawler – it is very easy to become addicted to the game’s style of gameplay. You start off as a self-proclaimed hero, which is hilarious to begin with, on a journey to capture a very important artifact called…“The Artifact”. Along your journey you run into a ton of characters that of course are not that important other than the odd one you have to come back to for a continuation of quests. You start in a very basic zone killing simple enemies and chickens – yes chickens – and gathering things for people but along the way I noticed that while I was collecting these things for people I was actually enjoying myself a lot because the distances were not far and you could fast travel using outhouses. There is no real tutorial to help you along the way but the game is very simple to pick up and play. You have a quest log, a skill tree that is very basic, an inventory that allows you to assign weapons, potions and many other things to buttons, and quest items that you can combine to create things to give to characters. 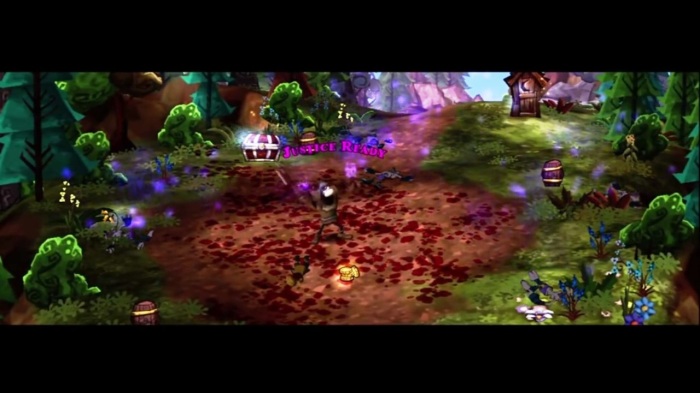 You will definitely have a good laugh at the weapon choices and all of the names given to everything. For example, I came across a weapon called “Fire Axe 2: Fire Harder”. The game gives you a good idea of what weapons to always have such as 2 physical attack weapons, one special weapon and a ranged weapon. Health is easy to lose but easy to regain through use of food such as chicken drumsticks, burgers, pizza and much more all assigned to buttons if you want.

As much as I have to call this game a Dungeon Crawler, I really didn’t want to call it that. We don’t call World of Warcraft a dungeon crawler straight out but it plays a lot like it where you must go to certain areas, clear that area and find the item you’re looking for. As you find the items you return them and then continue on your way to another area to clear it and continue. The dialogue is what truly saved this game from going nowhere. One piece of dialogue that sticks with me is a conversation with a man named Eubrick and DeathSpank where Eubrick is explaining to him how he found a secret but had to sell someone close to him in order to get the first three letters. He later goes on to explain he knows the Secret of Monkey Island. Classic joke at a great point in the game.

If you are looking for a game with wit, a fantastic art style and easy-to-grasp controls than you are in for a treat with DeathSpank. I had so much fun with this game that I completed everything in one play through just to hear all of the dialogue the game had to offer. Watch out for those Yeti Bears, Unicorn Wolves and the Two-Eyes Cyclops because they can leave you wanting to smash your controller to pieces.