Let’s get one thing straight: I do love my fair share of Indie titles. There is a lot of innovation that comes out of the Indie development community. Sometimes you find diamonds; sometimes you find mold. Unfortunately, for Anoxemia, I found myself some mold.

Don’t get me wrong, there are some elements that Anoxemia gets right such as atmosphere and feel but this is quickly washed away once you actually start playing the game. Gameplay is a core piece in what makes a game feel engaging to us. Sure you can add nice visuals and cool sound effects with a decent story but if the game itself does not feel engaging to play, it does not bode well. This is a PC port from a game that came out in early 2015 and it definitely feels like one too.

You control a diver in a side-scrolling adventure that explores the depths of the sea. Actually, you don’t really control the diver at all. You control a reticle that the diver follows and if the diver bumps into anything along the way, they pick it up. This means that your reticle can get very far away from the diver and you can lose total control of what they do. The diver can get stuck a lot and this makes you have to backtrack with the reticle just to get them to properly maneuver their way around. The reticle is also very sensitive. The diver would end up strafing back and forth trying to get to an exact position while I moved the reticle. It became almost infuriating at times just trying to get the diver to move away from edges and environment pieces.

The positive to all this is that you eventually get used to the controls and learn to maneuver the diver in the way that you want. Even after playing through the game I still felt like I didn’t have a full grasp on my diver though. This definitely added to my death count, which may have been the intention here.

You also have a sonar pulse and a javelin. The pulse definitely helps because you would have no idea where you were going or what you were supposed to do unless you had this. The pulse lets you know of dangerous elements in the water as well as leads you towards what you need to pick up. The javelin allows you to pull objects such as boulders away from a specific spot to help with events in the game. I found myself using this sparsely because I decided to just ram into objects instead.

So I Just Collect All the Things?

The game is all about collecting items to help discover the truth. Once you collect enough of the specified items, you advance to a new level much like a puzzle game. That’s right, the levels are laid out like a puzzle game; find the solution (collectables) in one part, move on to the next, rinse & repeat. 38 levels of this, which generally would not be an issue if the game was more engaging.

The game does not really explain to you that you need to collect these pieces in order to advance. I initially found myself swimming in circles in the first level wondering what I was supposed to do. I guess there is some positive to discovering solutions on your own but not for this type of game. I sometimes found my diver picking up objects while facing the total opposite direction of the object as well. This just added to the weird animation clunkiness the game had to offer.

You Are Going To Die… A Lot!

This game intends for you to die. It seems like it was the reason this game was created. There is even a trophy for dying 1000 times. This is not a Dark Souls game. The deaths in this game are maddening. You feel like you have made so much progress on such a simple game and then you die and have to start the level all over again. The Dark Souls series feels rewarding. This feels frustrating. I’m not fighting off enemies or doing some crazy platforming. I am searching for items and avoiding obstacles.

It should also be noted that you have an oxygen tank. The title of the game is Anoxemia, which by definition means “a deficiency of oxygen”, so it makes sense that this mechanic is in the game. And yes, there is another way to die other than running into deadly obstacles or being shot by a weird underwater turret gun that shoots Xs at me or by a mine that explodes from rubble falling on it. The oxygen tank needs to be filled every once and awhile and you can find places to refill it here and there. The audio cues help when you are low on oxygen but it becomes frustrating when you are trying to figure out a levels pathing and the oxygen depletes, you die and have to start again and again and again. A zen mode would have been appreciated for those that want to experience the story and the world instead of the constant death from starving of oxygen.

Tell Me Something Good

Enough about the frustration. Let’s talk about the positive attributes of this game: the atmosphere. The soft-spoken background music set a wonderful tone for the game. The only problem with audio came from the sound effects. The dynamite explosions, oxygen pick-ups, the boulder movement, all of these objects that made sounds felt like they were recorded on land at times and not underwater. Took me out of the experience a little bit. Back to the positives, the dark blue colors with the black shadow-like objects made me feel like I was underwater and exploring the depths of the sea.

The dialogue worked well in the setting that was presented and your diver would have conversations with himself about his surroundings and his discoveries. There was a sense of fear and curiosity all at the same time.

A Game That Starves Itself of Oxygen

Overall, I found this game to be a bit underwhelming. There did not seem to be enough to truly engage my appetite in a game wanting to be about exploration and discovery. The minor annoyance of the controls and the frustration over the constant deaths made it hard to want to continue playing this title. On the plus side, Anoxemia does deliver a wonderful aesthetic be it a little dated. 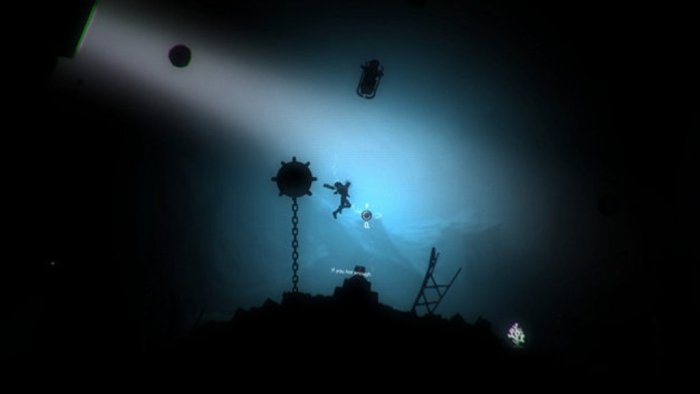 I can’t truly recommend this game to anyone looking for their next exploration and collecting title but if you want something where the trophies are as common as the deaths, this might be for you.