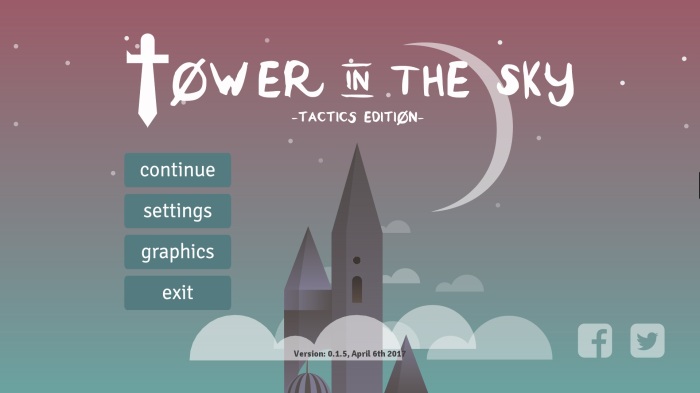 In the mysterious land of Tyrune, a tower looms in the distance floating in the clouds. A group of adventurers set off to solve the enigma of the tower and save the world. They will face scores of monster on their way to rid the evil that is seeping into this once peaceful land. Is this the beginning of the next big fantasy epic? Not really, instead it’s the lane defense strategy game Tower in the Sky by Three Brothers Games.

The story begins with an old sage from the small village of Glendale watching the skies as he always does. When he sees stars streak across the sky, he gathers the villagers to let them know about the prophecy of their impending doom. He then sends his adopted son Chance and daughter Cecile to find the wizard of the forest for only he will know what to do to save the land. As their quest continues they meet a slew of colourful and unique characters who they can recruit to join their cause. The whole story is told through bad puns as silly tropes which are fun and fairly comical at times. I give it some props for not taking itself too seriously, but the writing is far from amazing.

As your pack of adventurers make their way through each zone almost every node will have an encounter. The battlefield consists of four lanes with one hero in each. You’re able to swap places with another character at anytime and this becomes very useful as there are a diverse set of moves available. Attacks can hit in a straight line, a cross shape, a column, or just a single square so positioning is key. You have to be quick as enemies will make their way towards your characters and once they are within range they will attack your allies with extreme prejudice. Enemies sometimes will have elements attached to them which will make them resist and deal damage of that element, this of course also makes them weak against a different element which characters are able to exploit with gear. Overall there is a huge variety of monsters you will fight some of which have special abilities such as becoming immune, reflecting damage, attacking from range, or even kamikaze. As for equipment you’re given a plethora of weapons, armor, and trinkets to improve your characters or add elemental properties. Challenge in battles ramp up quickly being very forgiving in the early stages and becomes more and more punishing as you go along. This is where the strategy comes into play with which heroes you choose to bring into a given fight, how you equip them, and even how you maneuver them by well timed swaps. 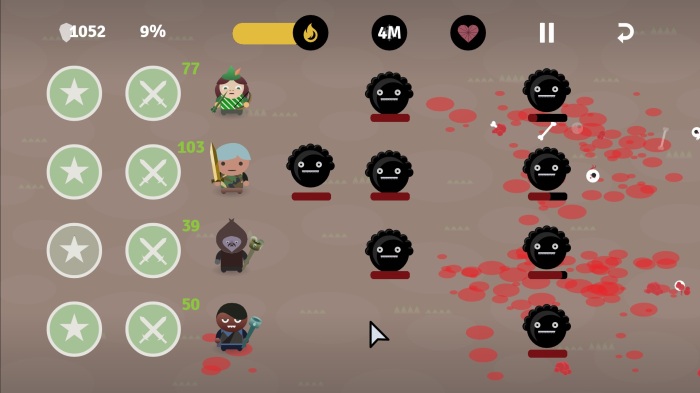 Visually the game is minimalistic, colourful, and not without a hint of charm. Most of this works quite well with simple backgrounds, enemies, and weapon art. However I have to say some of the character and building models are downright ugly. I never like to get hung up on anything graphics, especially with a game that totes itself as minimalist, but if they could have weeded out some of the ugly models it would have worked better and give it more of that chibi style. Sound effects and music were also a mixed bag with some tracks fitting the locale well and others just sounding repetitive and boring. I felt that the combat sound effects were well done and fitting but I particularly disliked the sound when talking. With a minimalist style game this feels like a missed opportunity where it would normally rely on great music and sounds to help engross the player and set the tone.

In conclusion it feels like this game just isn’t quite finished. I will give credit to a small team of two guys on what they have done so far because that is impressive, but it needs some work. Graphics could use a tweak possibly with how models were scaling since some had fuzzy edges. I ran into some game crashes late into my play through which really brought down my enjoyment. I also think the game could have been relegated to mobile since that’s where I feel I would play it the most. It even has a map node that allows you to follow them on facebook and twitter if that doesn’t spell free game with ads or $2-3 on the app store I don’t know what does. I don’t think Tower in the Sky is bad game by any means I think there is a lot of potential. The strategy has depth, there is a great variety in enemies and equipment, and I enjoyed the challenging end game, but I just have a hard time recommending this to someone that isn’t pooping.