When you start up a game that you have no idea what you are about to encounter there is a sense of curiosity but at the same time a sense of nervousness. Demon’s Crystals is not, by any means, a “new” game. The game originally released on PC back in early 2016. It is your typical fast-paced twin-stick bullet-hell shooter where you lead one of the Urican demons through multiple horde-like stages. Complete the objectives (either collecting crystals and/or killing enemies) and progress to the next stage. It is as easy as that.

As stated before, you control a Urican demon. You have the choice of being one of four different types of demons at the start of the game. Who you choose is basically the weapon you wish to start with, whether it be a gatling gun, shotgun, or two types of pistols. From there you are picking up weapon upgrades as you play through the levels, which can alter where your shots are coming from. There are also multiple power-ups that change the environment to either help you or work against you. 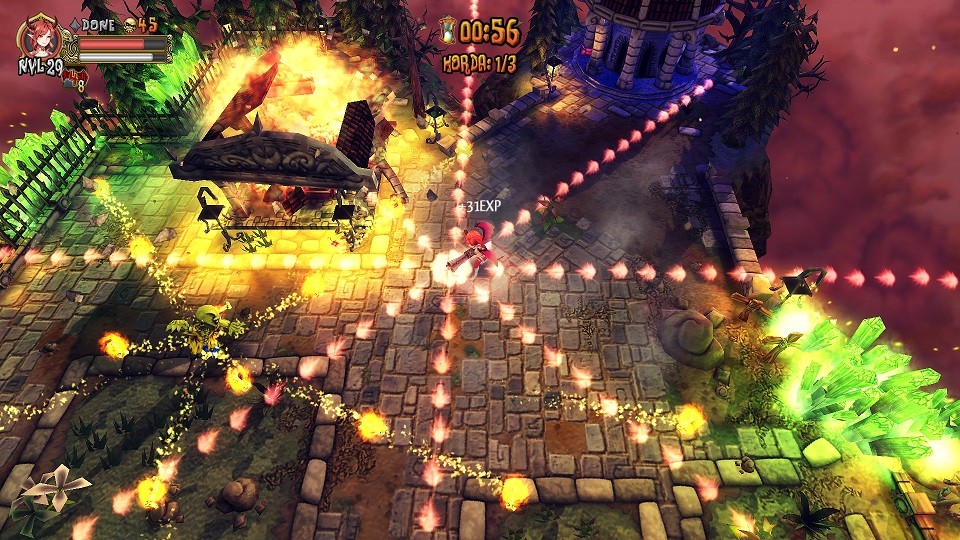 Out of the gate, this seemed like a truly fun experience: shooting, killing, shooting, killing, collecting, and shooting some more. Simple at its core. The problem here lies in the pace. Moving around is simple enough and comes naturally to veteran twin-stick players. Collecting crystals seemed more like a chore rather than an actual engaging experience. The pace of play goes from the slow moving crystal collection to the fast paced enemy killing. The gameplay feels the same throughout the entire experience without much changing in terms of player strategy. The environments aesthetically change but how the game is played does not and you feel as if you are just trudging through the levels trying to complete the objectives.

Admittedly, the weapon upgrade effects are nicely done and you feel good about completing your tasks as you watch your bullets destroy the oncoming obstacles. I found myself going for the same type of upgrades versus others most of the time. Even the basic straight shot was more useful than some of the upgrades when it came to where enemies were located on the map.

The anime-style art for the characters definitely seems out of place with the aesthetic of the actual game. The art-style, which is not horrible, reminded me more of a game that belongs on the PS3 rather than the PS4. Even the font choice on the scrolling “story” screen was a questionable and very confusing. Another game where there is no point for an actual story but it is there so that people will not complain.

Boss fights are another forgettable experience. Sometimes it was more difficult to trudge through the levels just to get to the boss than actually fighting the boss. For example, the first boss fight is a large skeleton that stays in one place most of the time and either slams its fists or throws out projectile bones. You don’t even need to go near the boss to beat it. You can just deal with all the minions around the area and shoot it from afar. The skeleton boss will eventually move around the area but only in a single direction at a time, so it is not difficult to get out of the way. Most boss fights take no time at all and you can literally stand next to a boss and drain its health before it can kill you. Where is the difficulty? Where is the strategic and compelling mechanics? Where is the excitement and engagement? Definitely forgettable.

You can’t really compare this game to anything extraordinary because of the price tag ($4.99). You get what you paid for, literally. The game has its fun moments but the pace really hurts the gameplay. Collecting crystals and defeating enemies on a timer can leave you frustrated at times especially when boss battles are over and done with within minutes. Pick this one up if you want something simple and quick but don’t expect too much from it.