Skylar and Plux: Adventure on Clover Island is a new entry into the 3D buddy platformer genre that rose to fame during the PS2 era with series featuring two character names as the title. If you have every played something like Ratchet and Clank or Jak and Dexter, you will feel right at home with this new title from Grip Digital and Right Nice Games.

Our adventure begins with Skylar, the silent protagonist, waking up in a laboratory seemly stripped of all of her memories and sporting a new robotic arm that’s been fused to her body. It isn’t long before she discovers that she is in the base of CTR, an evil monitor with a face that serves as the games antagonist.  Inevitable henchmen incompetence leads to her escape and crash landing on Clover Island. It is here that she meets the second name in the games title, Plux, a bird wearing a pilot’s hat.

Plux agrees to act as a guide on the island so that he can search for his father, since he was told to wait for him where he was and also too afraid to venture out alone. The rest of the story revolves around exploring the island for three cores that must be obtained before CTR can find them and use them to fuel his planet destroying device, freeing the captured locals and rediscovering lost memories with the aid of the mechanical arm that is now speaking to you.

The game was really easy to pick up and play as the controls are simple and responsive. All of the staples like double jumping, gliding and swinging across gaps function in a manner that is both expected and appreciated. My only real complaint came from the combat, where there was a slight pause between attacks that would sometimes leave me vulnerable to incoming damage. However, it didn’t take long to get use to this and begin planning my attacks accordingly, in a way forcing me to be a bit more strategic than just mashing buttons. Before long I was mixing spin attacks and dive bombs fluidly in order to avoid being a sitting duck.

This brings us to a problem that cropped up a few too many times in the game, things were often done well but in not near enough of a quantity. Throughout the campaign you will only run into a total of four different enemy types, that’s it, not even reskins of previous ones. There is one boss fight, the final one. It’s a good battle that shows the developers are capable of creating a unique, pattern based encounter with the right amount of challenge but you don’t get it until the end. With only three explorable zones outside of the main hub, it would not have required too much more effort to place an emphatic close to a chapter of the game by way of a boss fight. 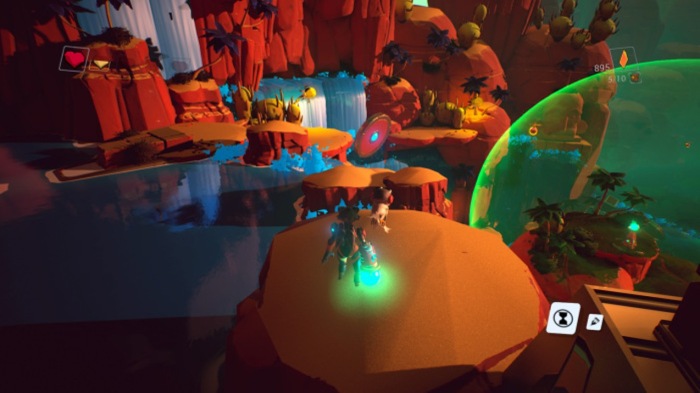 Challenge level is also fairly low. There were very few instances where I fell in battle or was stumped for very long on one of the unfortunately very few puzzles. There is no question that I enjoyed my time in the game, it was fun but as an older player I completed the adventure with a majority of the collectibles obtained in around 4 hours. This is more forgivable in that it is a budget release by way of digital distribution, though I still think the most value would be garnered from a younger audience or diehard fans of the genre. That said, I am still tempted to dive back in and finish 100% of the collectibles.

Swinging back to the theme of good but lacking, let’s talk graphics. The first thing that you will see upon booting up the game is a very stylized cut scene using a moving comic book presentation, and it looks awesome. Bold outlines and vibrant colours make everything pop off the screen. Once in the game proper however, the bold outlines are gone entirely and the colours look washed out. It’s not that it looks bad, as it still carries the same charming creative design but after the expectations are elevated with that opening, it is just kind of disappointing.

In fact, there are a lot of contradictions with the graphics as a whole. NPCs look well designed and lovingly detailed but every now and again you will just be kicked out of the feeling this world creates when you walk by a waterfall that seems entirely void of texture all together.

Are these complaints enough to ruin the experience? Not really, but they are kind of hard to ignore.

Another thing that is hard to ignore, though you wouldn’t want to, is the constant taunting by CTR as you progress though the game. If you need a comparison and somehow don’t come to the conclusion yourself, think Handsome Jack from the Borderlands series. An evil tyrant bent on your destruction that is just as likely to insult his subordinates as he is to threaten you. He is a genuine source of comedic entertainment in the game and I was always eager to hear what he had to say as soon as his voice chimed in. 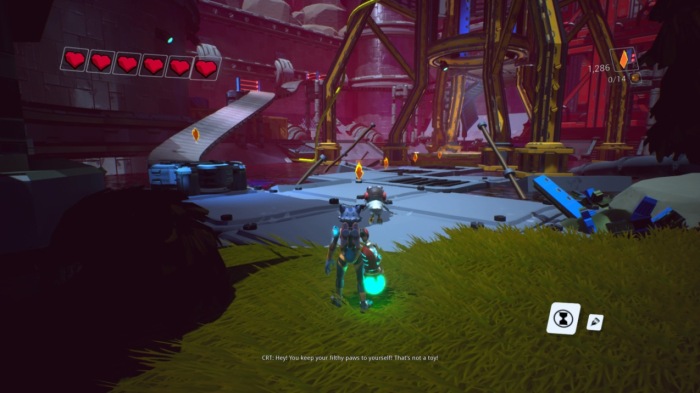 A decision to purchase this game would root in an individual’s consideration of price versus content. If it seems like I am being a bit harsh on the game, know that it is because I constantly found myself tempted to compare it to big budget AAA titles, and that is meant as a compliment. While this game would ultimately fall short in that bracket, there is a foundation here that could lead to some wonderful sequels if enough buzz and sales are generated. In this case, I am rooting for the little guy.