Most of the time when you pick up a game you have a pretty good feeling what to expect. Part of that is of course the predisposition to insulate ourselves with the familiar, a human trait that has led to a proliferation of releases that feed our hunger for games that are the exact same just a twitch different. We know how the new CoD will play, it’s just now in space. We know how Sport 2018 will play, it will just be in space… wait, no, that’s not right- but I think Space FIFA ‘18 faces tough opposition in its road to the top against Zombie Madden.

I’m pretty sure though that if you, a well adjusted and intelligent human being (this is the image I have in my mind of all our dedicated reader out there) named Steve (somewhere, someone named Steve is freaking out right now), were confronted with Danganronpa, you’d have no flipping clue how it plays. 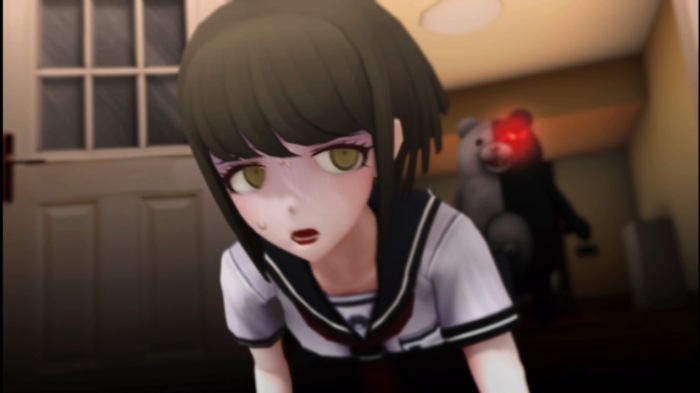 Do not fret though, as someone who has some experience with it, I didn’t have a flip either. Part of its obscurity is that until now, the series has largely been kept to PSP and Vita. The what and the what you say? Exactly. As of today though, Ultra Despair Girls is now available on PC and PS4 as well, and the other ones came out at some point too. Full disclosure- the only version I’ve played is PS4, so while I assume differences would be largely graphical I’m unaware if anything else has changed.

Danganronpa 1 has much the same theme as Despair Girls, but is a detective style murder mystery game with no combat. If that sort of game is not appealing, there is also an anime which covers the events of the game and either would be strongly advised before you play Despair Girls. If you’re not a big fan of anime, I’ll be upfront- this game goes pretty deep into the ‘unusual anime’ territory. 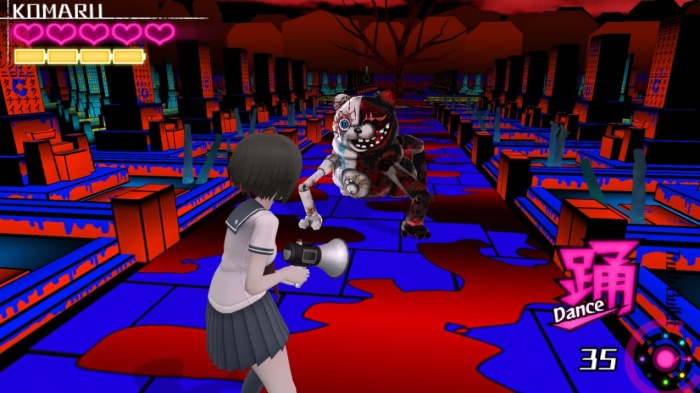 At its most basic, this game is a third person shooter with a survival horror feel. Somewhat awkward control, inability to move or aim quickly, slow weapons and limited ammo along with enemies that crawl out of vents as you draw near; pretty much a survival horror game. Like everything else with Despair Girls though, there’s a jarring disconnect between what you are doing and the situation you are placed in. The game is scary in its own unique way, but if you are into jump scares or gore this game does not rely on them, and while it is a psychological horror game in a sense, don’t expect to earn any nightmares here.

There is some mild competence needed for enemy management and shooting skills, but combat is approached more as a puzzle throughout the game. You are given various powered up weapon types, almost like Mega Man, that have various effects. You can often save somewhat sparse ammo by thinking tactically and you definitely cannot go in guns blazing (scissors snipping is another story).

As well, you face a variety of riddles and combat puzzles throughout the game where you are rewarded for doing them a specific way. Information to solve puzzles is readily available, and for the most part the biggest challenge isn’t figuring it out, but in the actual execution of the plan.

Combat at first feels pretty unendearing, but as you go deeper into the game it begins to grow on you as you learn new abilities and face more varied and dangerous foes. Clearly though, battle is not the focus, and you will spend a great deal of time in back to back cut scenes. These can drag on a little which makes the pacing seem poor at those times, though while in dungeons the combat, puzzles and short dialogue skits are actually very well paced to avoid anything getting repetitive. The exploration aspect is relatively linear itself, with collectables only a little off the beaten path. Maps are both a bit small, yet have quite a bit of running involved as you wait for the next enemy to pop out. That said, every room or portion of a map has its own purpose so each situation is at least a little different.

Where this game really shines is in the theme, which consists of a trifecta of music, aesthetic and the story. The score ranges from appropriate to spot on, between chill tunes as you explore to wildly and perfectly inappropriate music to accentuate the insane disconnect between the disturbed thing you’re witnessing and the bizarre yet generally well voiced (especially Komaru Naegi) conversation accompanying it.

If Persona 5 (the last game I reviewed- shameless plug) made you hate adults for their cold, ruthless self-centered egos; Despair Girls will make you hate children just as much for their cruel and unpredictable ids… y, y’know, more than you already do… you terrible person.

My mouth hung open many times as a bizarre scene grew ever more repulsive, and the game does this without a speck of gore. In fact, the extremely stylish aesthetic and friendly atmosphere are both part of the series’ charm and what makes it so cunningly cognitively dissonant. Colourful and cheerful, lacking in gore and with enemies that tend to be more cute than threatening, there is still a well established feeling of despair that settles over Komaru, the protagonist.

A normal, unimpressive girl hoisted into an unbearable situation with no lead up, at first there barely seems to be a story at all beyond surviving. As more uncovers though, it quickly becomes intriguing, as does finally getting back at the antagonists who are both very difficult to take seriously, and very easy to hate as they assail poor Komaru with one disturbing and despair inducing event after another.

Enjoyable game overall, and it is long enough to be satisfying but not so long that you feel it dragged its feet. Feels like it will only be appealing to a niche crowd, largely those who enjoy anime, but if you don’t mind taking a chance on something different this game is definitely different. If different were a genre, this game would be in it… but in the good part, not in the part with the mayonnaise and bread simulators. I dunno how to describe it… wait!