I am going to dive right into it and reveal the biggest reason that Tangledeep was just not for me, which could coincidentally be the most appealing for others, the difficulty.

To clarify, I am not referring to those instances of the random generator creating an unlucky situation that leads to a death, which did happen to me at least once where I went to a new floor and within 3 steps found myself surrounded in a helpless situation . While that is frustrating, RNG difficulty spikes are to be somewhat expected in a rogue like that has random generation.

I am instead referring to conscious decisions that the developers made such as infinite enemy respawns. I don’t want to have to decide between moving on to a new floor and being completely out geared or risking precious healing items on the endless wave of enemies on my current floor just for the chance to get some better loot or a spring to restock some charges to my healing flask. 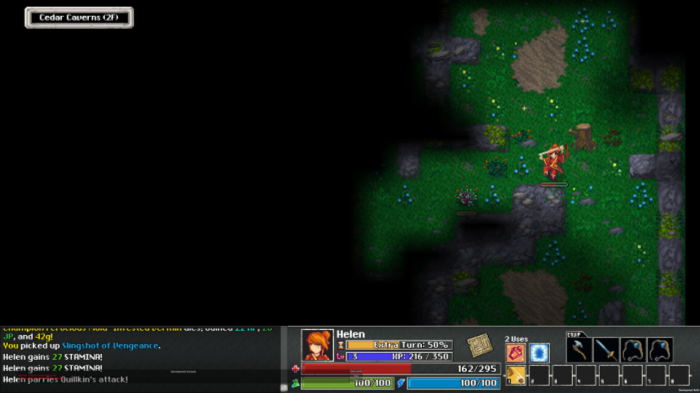 I get risk vs reward but this just seems to be weighed towards the former. I am sure there some gamers out there who love that sort of thing and are thinking that my complaints are unwarranted. In that case this game is absolutely for them. In fact, there are special treasure chests on each floor that if opened will provide some nice goodies but also further increase the difficulty of that run.

It should be a given that I avoided them.

My complaints aside there are 3 game modes. With adventure mode clearly geared for gamers like me, where death means that the character is simply sent back to town losing that levels worth of progress. Above that is Heroic mode, which is the one billed as the intended experience, which allows items deposited in the bank and town upgrades made to still be intact when rerolling a new character. Finally there is the hardcore mode, you know should already know what this means, death means start everything over again.

With all this talk about death, how do we combat it?

For starters we have nine classes, with promises of more to be added, that allow a choice in play style. If you prefer to fight from a distance you can make a hunter or a spellcaster, want to get right into the fray then roll a brigand or paladin. There are even options to change your class midgame by paying town or having a class change scroll drop. Just make sure when switching to have appropriate gear. I found out the hard way when switching to a hunter that if you don’t have a ranged weapon when switching, the class abilities will be useless until one drops.

There is no end to loot that can be obtained with weapons, armour and accessories also carrying a random generation to them. It’s entirely possible to get a weapon early that does additional lightning damage and gives a huge boost to the early going. There is a cooking system that allows for the creation of additional recovery items, a pet system that lets you hatch or capture enemy creatures to fight alongside you and even an orchard where seeds can be planted providing food items periodically or the option to chop down the plant for a quick burst of experience and job points.

In other words, you are provided enough tools to make a solid go at survival.

The graphics in this game was a personal highlight. The 16-Bit sprites are imaginative, colourful and very pleasing to the eye. It’s never been a secret that if something resembles SNES graphics that it will get a few extra points from me. Simple cues will allow you to see if you are standing in an area of attack, if an enemy might cast a lightning bolt at you or even if the shiny new piece of armour you have obtained is leaving a trail of acid behind you. My only real grip is that there could have been more animations used. For example, no matter which combat square an enemy occupies around you the attack animation will always be the same. So if your Paladin has a downward swing, that is what you will see even if attacking to your top right. It is ultimately a small grip but one that I would have liked to see addressed.

Sticking with the presentation, the music is excellent. While there is no voice dialogue and may make it very tempting to run your own soundtrack while playing, it is worth listening to at least a couple of times. Sound is always the thing I am least perceptive to when reviewing games and yet I found myself enjoying what was on offer, even if it didn’t always fit the tone of a current event. I won’t harp on music staying melo during combat because the transitions happen so frequently and for short bursts that it would be jarring to have it constantly changing.

The controls are very basic in this game but I highly recommend people avoid the controller option and just stick to a basic keyboard scheme. Otherwise you will find navigating menus to feel very clunky and interrupting the pace of the game. While the game is turn based and you can take all the time you want to input your commands, it just seems more practical to hit one key stroke per command. Additionally, movement is rather sensitive with a controller and even one step out of place could result in yet another death.

This game is definitely geared towards fans and veterans of the genre. For those that are new they should prepare themselves mentally for the defeat that comes with the learning process. However, at the time of this review the game is still in early access and there have been times where I have logged onto steam multiple days in succession and been met with an update. That type of support could mean wonderful things for the future of this game.