For almost two decades, developer Insomniac Games had made games only for the Sony brand. With the release of Sunset Overdrive the company has created only their second game to grace a Microsoft console and the very first Xbox exclusive in their library.  Over the years they have acquired experience with crazy weapons, endearing storytelling and super powered open world gameplay. This is their chance to bring all factors together into one package for a whole new audience.

When I say endearing storytelling, I don’t mean complex or deep. Just fun and interesting while keeping you motivated to continue forward. The main protagonist, referred to throughout the adventure as player, is working on the island of Sunset City for the very quickly revealed as evil organization, FizzCo. They have skipped many health protocols with the development of their new energy drink Overcharge Delirium TX and are throwing a launch party in order to introduce it to the masses. As a company employee, the player is at the festivities as the janitor but prohibited from partaking in the actual festivities. For careless evil company and unexplained convenient plot development reasons all of the people who consume the new drink turn into horrible mutations.

The rest of the events in the game make just as much or less sense. However, this is by design as Insomniac has clearly prioritized fun above all else. It’s a video game and it doesn’t need to make sense if it keeps the gamer invested and entertained. So many times the characters will break the 4th wall talking to the gamer, get direction directly from the narrator or even discuss video game conventions like invisible walls in order to just keep the pace moving and get to the next segment. Pepper in a lot of tongue in cheek humor and you have a winning formula.

That being said, the main story itself is not the longest clocking in at about 8-10 hours. With that in mind, there were many efforts made in order to extend the gameplay. Strewn about the map can be found additional side quests, challenges and collectables to be completed for additional customizations or currencies. If by some chance you are a completionist and have finished all of the above before making it the credits, you can hop online to do some coop gaming. In other words, the story is a very small portion of what is on offer.

The collectibles in the game require a special mention and not necessarily in a positive light. This game has turned its Collect-a-thon elements up to 11. There is well over 750 items to gather in the game. I already thought that the 350 blast shards in Infamous were a lot but this offering dwarfs that. What’s worse is that the map feels a bit smaller and therefore those same items are much more condensed, meaning that you can’t even take 2 steps without finding 3 more of them on your mini-map. While easily ignored, many of them are tied to additional story points and character modifiers, so you are constantly tempted by them.

To be clear, while none of that was game breaking or sullied my lasting impression of my time in Sunset City, it did cause me to feel like the developers were looking for a cheap way to artificial extend the run time of the game.

Two thumbs up for the presentation. The graphics shy away from realism with a very colourful and stylized take on everything from ally NPCs to building fronts to strewn about assets like shrubs and vehicles. Not only that but it all moves at a solid clip with a great balance between detail and speed. The same creativity can be seen in all of the costume pieces you are given to outfit your character. While not impacting the game play in any way, it’s always fun to have some control of the personality that your avatar conveys through image.

Traversal is a blast, period. As you grind, air dash and water slide from one side of the map to the other you will be met with consistently solid controls and fluid transitions, despite the fact that this is supposed to be a normal human who shouldn’t be able to do all of these things but whatever. I would seldom use the fast travel system, which while handy, couldn’t provide the same rush of freedom and speed that footing it did. I had a friend give the game a try and he just spent 20 minutes traveling around the map with no particular objective. That factor alone could give reason and excuse for all of the collectibles mentioned earlier.

Combat is also just as easy to pick up and have fun with. There are hordes of enemy fodder for you to take out with an arsenal of crazy weapons that range from vinyl record shooters and explosive teddy bear launchers. This is par for the course from a company that gave us the Ratchet and Clank series. If there is one thing that would be a complaint with the combat, it wouldn’t be hit detection or even poor AI but learning curve of utilizing the traversal system in battle. In order to increase your combo scores, increase your power meter and avoid taking damage at a high pace, you will have to be constantly moving. Aiming while moving is something I was absolutely able to develop a feel for but on occasion the lazy gamer side of me just wanted to plan my feet and snipe a couple of enemies. 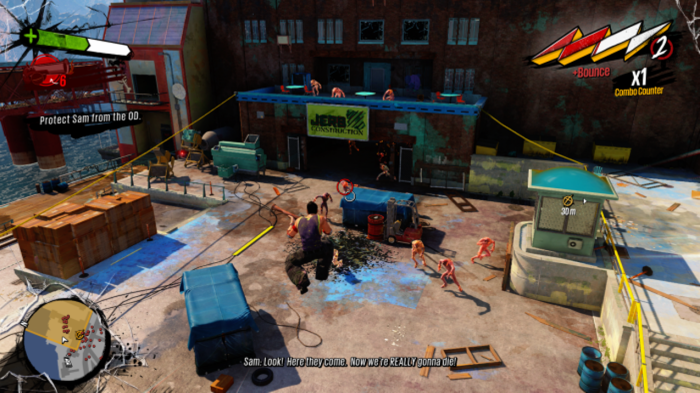 Sunset Overdrive is not the system selling exclusive that the Xbox One needed but it is more than a solid additional to the library that is super easy to enjoy. The game is simply bursting at the seams with personality. Anyone who is looking for a game that doesn’t take itself too seriously and is just fun to play should grab a copy.