Riskers is an interesting mix of classic Grand Theft Auto driving and Hotline Miami-esque action from developer ShotX Studio and publisher Meridian4. A good looking game with a strong soundtrack and somewhat dodgy gameplay, Riskers reaches for the heights of its inspirations but falls short in execution.

The graphics look like a straight upgrade from those of Grand Theft Auto 1. Sprites are clean and vibrant, the car designs are realistic and bring to mind real-life vehicles, and the levels are easy to read but do suffer from repetitive asset use. The city map becomes somewhat hard to navigate due to the sameness of every street and a lack of clearly defined districts with their own look and style. The animations serve their purpose and little else. I would have liked to see more variety in character sprites and level tiles, but the car variety is a strong point. 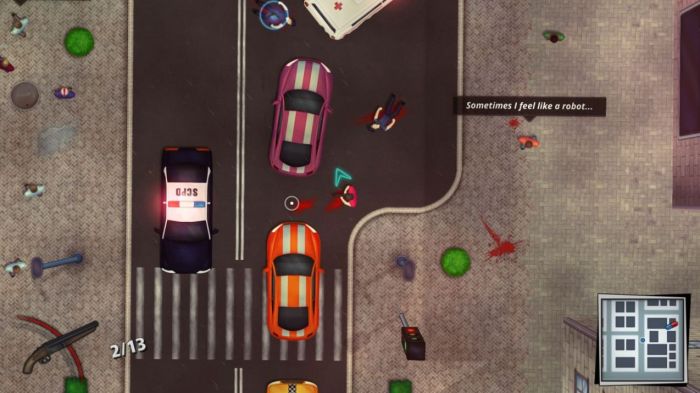 Riskers has a strong soundtrack, one of many things it shares with Hotline Miami. During every mission I found myself bobbing my head along to the driving trace beats. While trance music isn’t necessarily my cup of tea, it fit the game’s art and gameplay well. The combat sounds were crisp, the guns were loud and full of bass, and the car engines roared, purred, and hummed as one would expect.

If you have played the first or second Grand Theft Auto and Hotline Miami, you have played better versions of this game. The gameplay isn’t bad, it just lacks the tightness and polish of aforementioned classics. You and enemies can take multiple hits, unlike Hotline Miami, but this just made the combat feel sloppy. Enemies don’t really have AI, they just path directly at you in the clearest route possible. If they can’t find a route I found them often just running against walls or level objects. This lead to the familiar tactic of aggroing enemies and then retreating to a choke and hoping to dodge any shots they get off while soaking your shots. The driving is tight, but not as tight as the original GTA and the camera is a little too tight to the ground, making reacting to distant crashes almost impossible. Structurally, the game uses missions to drive the story and put you into the indoor action levels and then has various activities in the overworld that you can discover and tackle at any time.

Riskers is not a bad game, it just has the issue of being too similar to two great games. It’s got good graphics, but they’re also repeated too much. It’s got great sound design, but not quite as good as Hotline Miami. It has solid gameplay, but not as tight as either of its inspirations. At $10.99 CAD, it costs the same as Hotline Miami. Unless you’re itching to play something similar but different from Hotline or GTA, I’d say just play those. If I had any suggestions for a Riskers sequel, it would be to find some way to differentiate itself from its inspirations.