Numantia is a turn-based strategy game from Reco Technology that mixes strategic depth with a strong narrative to create a genuinely pleasing indie experience. Simple and readable three dimensional strategy segments are split up by beautiful, bold story-board cinematics drawn in a style reminiscent of a child’s story book. The music is suitably epic and the sound of marching troops, clashing swords, and whipping slings add excitement and punch to the usually slow-paced gameplay of a turn-based strategy title.

There’s not much to write home about with the battlemap graphics. The models are clean, it’s easy to tell who is who, and the animations get the job done. The story sections are another story. I can’t quite put my finger on the art style, it something like a comic book out of the 60s. Solid colours, hard lines, very little shading. Something akin to a motion comic when it comes to animations. I found the desire to see more of these scenes to be a driving force in playing the game. 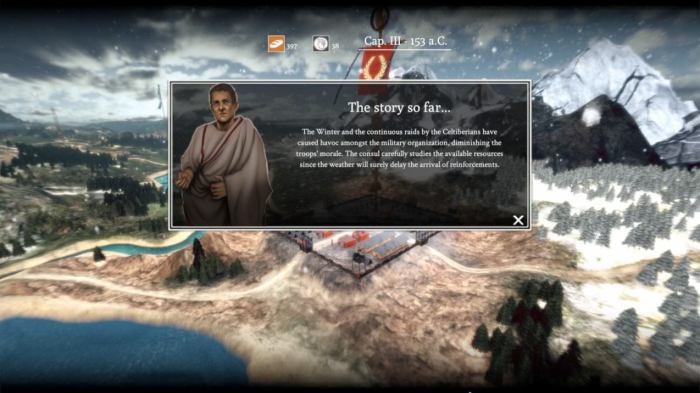 The game focuses on a conflict between two factions; the Roman Empire and the game’s namesake, Numantia, a Celtiberian tribe in what is now modern Spain. It follows the historical story of Rome’s conflicts in the Iberian Penninsula.

Numantia’s gameplay is split into two main sections; the army’s camp and the battle mode. Anyone familiar with a Total War game will feel at home navigating the army’s camp. You can enter buildings such as the barracks and market to buy troops and items. Story missions will also take you around the camp giving you bits of narrative to help drive the story forward. Several unit types can be bought from the barracks and these units can be equipped with items bought at the market. These items may increase their endurance/health, or allow them to enhance the morale of surrounding troops, which improves their initiative and allows them to move further on the battle map. There is also an overland map but it seemed to just be for showing the locations of battles or story interactions. 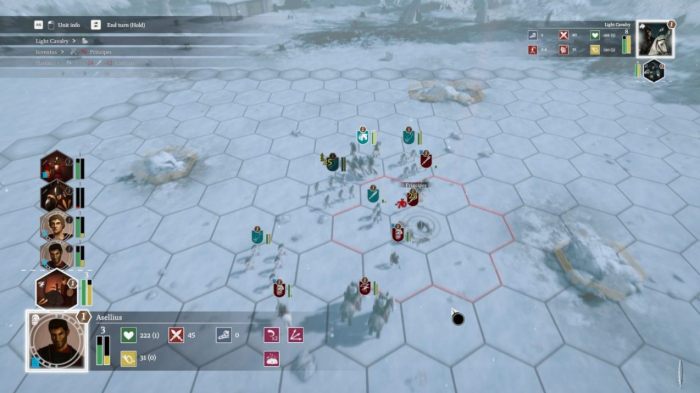 The meat of the game takes place on the turn-based battle map. Using a hex grid, units move across the map and make attacks not unlike the combat in the last two Civilization games. The difference here is that unit facing is taken into account and unit spacing has a significant effect on morale of surrounding units. This leads to far more strategic depth than something like Civilization’s battles. Like most similar games, unit types have other types they are strong and weak againsts, ensuring you want a force of mixed units positioned with their flanks secure.

Sound effects, like the battle graphics, do their job and I have no complaints. The music, however, is great. It is in a style not unlike that of other Roman era games. I’m not sure if it represents historically accurate Roman music, but it feels appropriate and I found myself listening to it while keeping the game in the background. 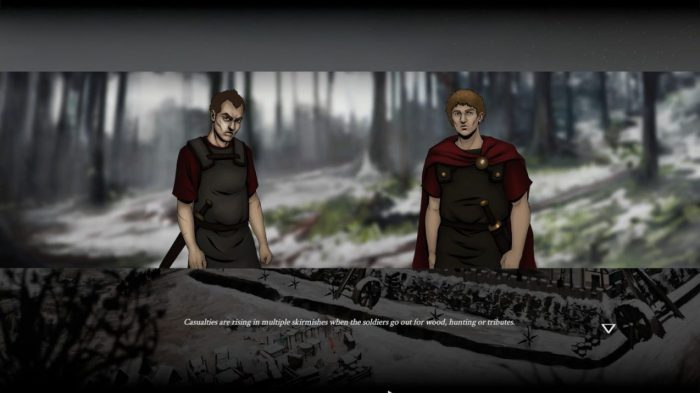 Numantia is a solid game with a strong historical narrative and deep strategic gameplay. The battle graphics are somewhat above average for an indie game and the hand-drawn style of the story cinematics makes you want to keep playing just to see the art. At $21.99 CAD, I would suggest this for strategy lovers but would wait for a sale for the average gamer.