Road Rage by Team 6 Game Studios is a title that attempts to revive the old motorcycle combat style of game that has been missing in action since the last Road Rash was released in 2003. By infusing elements of the industry giant Grand Theft Auto franchise, are we baring witness to the game that will successfully revitalize an entire genre? After playing it, I can definitely say without hesitation that, it is a game.

There are two crucial elements that are absolutely necessary when creating a game such as this, solid controls and fantastic collision detection. Sadly, these are two things that cannot be crossed off the checklist.

Initial impressions had me thinking that the game actually did handle pretty well but that faded faster than I could have imagined as the first time I hit top speeds I realized how much of a struggle this was going to be. Sure I could try to ease into cornering and drift when necessary but the game seemed to flip a coin in regards to when it would actually acknowledge these requested inputs. Admittedly, after a little bit of time I was able to adjust ever so slightly but I still always felt like I was far from in full control.

Another reason that I was always unsure of how I would perform was rooted in the terribly inconsistent collision detection. One moment I would be tearing down a long stretch of road while depleting my nitrous reserve and bump into a random car, only to be sent flying in the opposite direct or even into the air like a bouncy ball off of a trampoline and the next I would be moving at a snail’s pace, hit a curb with my front tire, resulting in a fiery explosion. This is all assuming that I didn’t just drive through the asset as in many instances elements of the game world would possess no interactive quality. It took 30 seconds into my play time to drive through a warehouse, brick walls and all, only to come out the other side unscathed. As a video game there needs to be certain parameters set in order for the gamer to know what they can or cannot do, having objects be present as they are represented shouldn’t be a guessing game.

Driving is only half of the experience; let’s talk about the combat, same problem. Hit boxes possess no determinable consistency. Sure the game can give you a variety of weapons to unlock such as hockey sticks or hedge clippers but they are different in appearance only as all of them may or may not hit their target regardless of length and distance from it. Many times when attacking pedestrians, which the game encourages you to do, the camera would go into the slow motion effect that indicates a hit but would still present you with an empty swing.

Speaking of unlocks, there is very little motivation to get them. Since they have very little impact on the game mechanics, they were just kind of there. I do realize that some were required to unlock further missions and yet I repeat there was very little motivation to get them, more of this game was at no point what I wanted. At least in an attempt to increase the games length, the developer included a collectible in each of the zones, that’s right singular, bringing the grand total of collectibles to seven, now that’s longevity.
At this point you might ask why I would say the game encouraged you to hit pedestrians. Well that’s because, and this is where the GTA elements of the open world come in, you can amass a wanted level represented by very familiar star icons which cause the authorities to take pursuit. Don’t worry, the AI in this game is also terrible and I found myself able to outrun cops on a number of occasions due to them getting stuck driving into a wall as if their vehicles weren’t outfitted with a reverse function. All the more impressive considering how empty this open world is.

Let’s shift from inconsistent to lacking. I should have known when I started up the 1.8Gig download for this title that there would be a lot of aspects that would be sparse. You will see pedestrians and the same few car models moving about but there is no character to the environment. Never has an open world felt less alive and so artificially placed.
The story and objectives are also handled very lazily. The beginning of the campaign is a small series of still shots with some voice over work. After that missions are given out in conversations through your cell phone which is the most minimalistic of techniques in order to attempt a feeling of emersion. Never mind that many of these objectives that are handed out don’t match the mission that follows at all. Get a call that someone is cornered in their house and there is going to be a fight, you guessed it, solo stunt race to try and get some hang time and to pop a wheelie for a set distance. The only positive to this inconsistency is that if the quest giver tells you that your cut is $102, the game will still give you like 5k upon completion. All of this is done with voice acting that has such poor delivery and over acting that it belongs in a primary school play where even the kid’s parents are walking out. 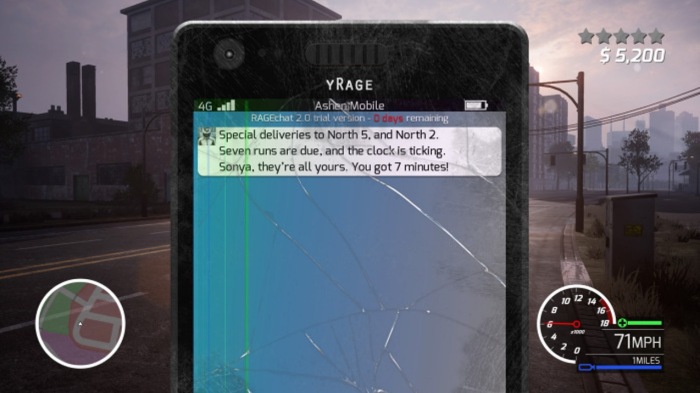 Don’t expect the graphics to do you any favours either. They feel generations old. It’s not uncommon for a game to have a bit of a delay in loading textures but with Road Rage you will hit a point where you think that they are halfway there and taking a really long time and that’s actually it, there are no more.
It’s been a challenge to find much to praise in this title but here it is, the music in this game is pretty good. Not licensed music or mind blowing in any way but suitably atmospheric and appropriate for the feeling that this game is desperately striving for.

There couldn’t have been a more appropriate title for this game other than Road rage as that is the feeling you will get trying to slog through it. You might be able to get a few laughs playing the game with a buddy but that experience would have to come at the most heavy of discounts as even the budget release price is not justifiable for what is on offer.