Titan Quest is a re-release for modern day consoles of a PC title that originally came out in 2006 and its first expansion pack The Immortal Throne from the following year in one package. There aren’t a lot of companies that would attempt to revive a game 12 years later but with THQ Nordic purchasing the license and attempting to breathe new life into it, the time has come to see if the gamble has paid off.

While some of the changes were clearly necessary in order to make the game run on a console like updating the UI and menus in order to make use of a controller, there are others that can be seen as a nice feather in the cap such as the reworked textures.

The graphics really do come off as a mixed bag. Character models are still lacking and seemed to have missed the boat on being updated, not to mention they still have very stiff animations for movement. When I say that, I mean the equivalent to grabbing a tabletop miniature and moving it from left and right in order to simulate the motion of walking type stiff. On the other hand, the world looks amazing. The many varied landscapes look nicely detailed, wonderfully coloured and could fit an argument of being programmed for larger resolutions from the word go.

Complimenting the game world on its graphics is the way to go because the same cannot be said for its level of interaction. This is the first example of how not adapting to aspects seen in its contemporaries  will make you wonder if staying true to the original was the right call. Something as simple as not having breakables makes it stand out all the more that you can only really kill enemies and loot predetermined caches like chests or sarcophaguses which puts a bit of a limit on emersion.

While I don’t feel it necessary to criticize the voice work, since it’s just as good or bad as it was the first time around but the delivery from a mechanics stand point is baffling. There is a ton of voice work in the game meant to enrich your experience and make you care about what’s going on and that should be a notch in the pro column. However, as soon as you start interacting with NPCs you will find out why that might not be the case. Conversations are slow and if you move even one step once they have begun, they cut off. Meaning that the overall experience of the game comes to a screeching halt as you put down your controller and just stand there, causing you to yearn to get back into the fray. If you think you can just bypass the dialogue by reading ahead to get the story, forget it, the text moves even slower. 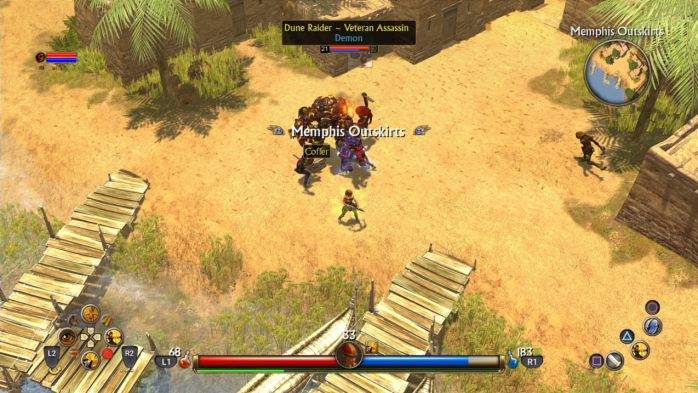 One other really big complaint from the games lack of adjustments to the originals conventions is the inventory. They still utilize a grid based system, which is to say the least, not great with a controller. Fans of the genre know how much loot drops and how often you are rummaging through your bags looking for that new shiny greatsword that was somehow hiding in the turtle you just hacked to bits. It only added a few seconds more each time you look but when you are in your bags every few screens it adds up and like the dialogue slows things down immensely.

I’m not entirely sure on this one but I believe there was also a grid system used with character movements. When you let go of the controller, your avatar will seemingly take a few more predetermined steps as if they are completing that block of movement. It becomes barely noticeable after the first few times but if you are up against a fence or wall it will magnetize to it and your character can even end up changing directions causing you to aggro adds or initiate combat when you are trying to be evasive.

We all know that the bread and butter of the genre is the combat. You will lose endless hours just cutting down enemies in hopes of getting some better gear in order to be able to cut down even larger enemies, rinse and repeat. Luckily, all of the things that make that possible are the same as before. You have a number of different combat styles of which you will eventually obtain two in order to customize your personal favorite method of slaughtering. There are a variety of weapon and armour types from things like staves for the magically inclined to shields and fortified armours for those who prefer to protect their allies.

Speaking of allies, there is no couch coop. While there is online multiplayer for up to 6 people the omission of couch coop really hurts in elevating this title to must have status. This stings even more for the upcoming Switch launch as a lack of alternatives could have seen this game corner the market for the genre.

If you are already familiar with the story of trying to restore the connection between Earth and Olympus while fighting to stop the Order of Prometheus from releasing the Titans to destroy everything that you know, then you there will be exactly zero surprises to you in the narrative department. Newcomers however will find a fairly generic, although well written, tale of good vs evil that sees them visiting places like Greece, Eqypt and China in the pursuit of racking up a monster death toll that a semester in advance statistics might allow them to calculate.

When playing the game, it’s easy to notice that there is really no well designed quest helper to direct you towards your primary or secondary missions. You will also notice that it’s not necessary as it is incredibly difficult to get lost with this worlds layout. Areas can be large but often only house one or two branching paths making it really easy to do clean sweeps before moving forward. Speaking of easy, by making the addition of having the character path to the closest target to them when they press the attack button means that entire groups of mobs can be cleared while just holding down one button. Once tougher named mobs and bosses show up, there will be need for potion management and some evasive maneuvering but a large part of trash pulls become very one dimensional.

Mechanical and design missteps aside, this game is a lot of fun. The addictive nature makes it very easy to dive in for a few minutes or to marathon a gaming session. For some reason the second expansion Ragnarok, which released only a couple years ago, is not included in the this package. Which to me means with the games success could mean additional paid DLC in the future. Even still, the two releases can easily provide 40+ hours of gameplay, and for a release price of $30, that’s pretty darn good.