Have you ever wanted to run your own haunted mansion? Ever wanted to lure unsuspecting victims with promises of vacations or prizes only to have your minions rip them to pieces and eat what’s left? If so, MachiaVillain may be the game for you. Developed by Wild Factor and published by Good Shepherd Entertainment, MachiaVillain takes the gameplay elements of games like Prison Architect and RimWorld and throws a Halloween skin on the whole experience. The graphics are simple but sharp, the music is suitably atmospheric, and the gameplay is simple enough for a newer player while being deep enough for veterans of management style games.

The graphics are nothing to write home about. 2D sprites on 2D backgrounds, but the art style is endearing and has a certain Edward Gorey look to the whole thing. In a game like this, being able to tell what’s going on and cutting through all the clutter on the ground is important and MachiaVillain does a good job of that. I also really like that everything has a kind of crooked look to it. Even when you lay down a straight wall, it will look a touch crooked so as to give your whole mansion an unsettling tilt. The animations are par for the course for this type of game, with your sprites standing next to objects they are interacting with while a circle fills to completion to let you know when they’ll be done. Overall, the graphics are serviceable and I have no complaints. Would have been nice to get a little more depth in the animations, but it’s not necessary. The music has a very Danny Elfman feel to it. Both creepy and whimsical at the same time. The sound effects do what they need to, sounding like they were lifted directly from some mid 90’s Halloween themed cartoon.

The meat of the game will be familiar to anyone who has played the aforementioned Prison Architect or RimWorld. You assign jobs, you set areas to be cleared, you layout your mansion and then you let your minions do their assigned jobs. Your goal is to create a mansion that attracts victims. Different rooms have different purposes based on the furniture you put in them. You have to avoid suspicion by making sure to clean up blood and bodies and by preventing your victims from escaping or using their phones. You also have to manage your minions, making sure they have enough food to eat and keeping them busy and happy. There’s a research mechanic, allowing you to build new objects that make your job and your minion’s lives easier. Your minions also gain levels in their skills as they use them, allowing you to specialize them for certain jobs or for combat against invading spiders, victims, or other enemies. 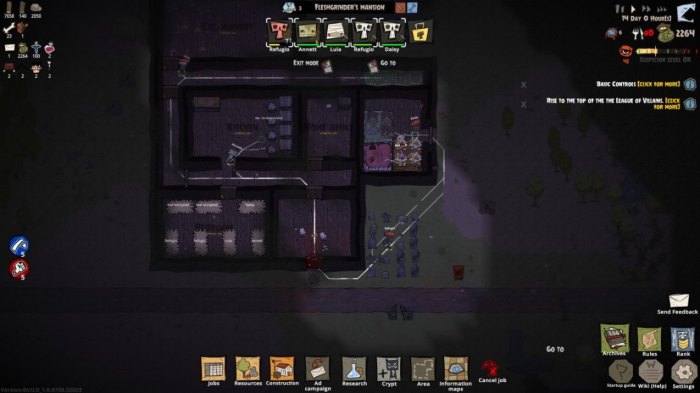 As a fan of management games, I am really enjoying MachiaVillain. It’s got an endearing style, the gameplay is tight and the bugs few and far between (a few pathing issues are all I’ve really run into). When you really get your mansion up and running it’s a real joy to watch victims run screaming through the halls as your minions chase them down and cut them to bits. While it may not have the depth of something like RimWorld, it doesn’t really need it. It has a solid concept with a narrow focus and it executes it well. I would suggest this to anyone who is a fan of the genre or for anyone wanting to dip their toe with something a little less expansive than a RimWorld or Prison Architect.