There is nothing quite like the classic ‘Yo Mama’ jokes of old. ‘Yo Mama is so fat’, ‘Yo Mama is so old’ or even ‘Yo Mama is so ugly’ became popular with the type of people that wanted a quick jab at their friends. Today we see insults thrown around on a more personal level through social media like Twitter or Instagram. With all this going around it would only be fitting if a video game came out that allowed us to simulate all of this insulting. Unfortunately for us there is such a game and it is a title we should stay far, far away from.

Oh…Sir! The Hollywood Roast is an insult simulator of sorts developed by Good Shepherd Entertainment. This is a follow up to their previous title Oh… Sir! The Insult Simulator, which did not fare very well either. They took the classic celebrity roasts seen on television and made them a score-based bore-fest allowing you to craft your insults the way you want and hurl them at your opponent crippling their ego in the process. 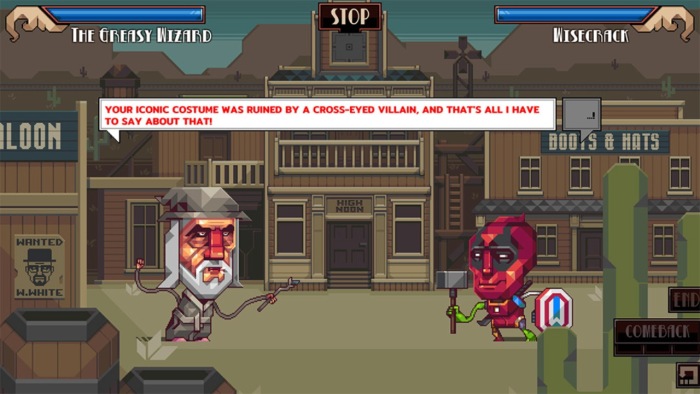 The gameplay is simple. There is a shared list of either words, phrases or pauses and you must take turns forming an insult from this list scoring points for the most effective sentences. As the list becomes depleted new items take their place and you start to build a new sentence continuing to form insult after insult. Your score efficiency will depend on which character you select and who your opponent is at the time. These points you accumulate decrease your opponent’s health and once their (or your) health bar is depleted the match is finished.

The theme is centralized around movies, theatre, and cinema. They try to go for a unique pixel-polygon style aesthetic but it does little to help with the overall experience. The characters are direct rip-offs of famous celebrities you will know such as Harry Potter, Samuel L Jackson and many more (but named differently obviously). You will feel no connection to these characters nor will it truly matter what their insults are directly. You pick a character and just go with it. So much more could have been done with these characters. Sometimes you will feel like you chose a really good weakness insult for a specific opponent only to have it give you minor points and leave you confused. 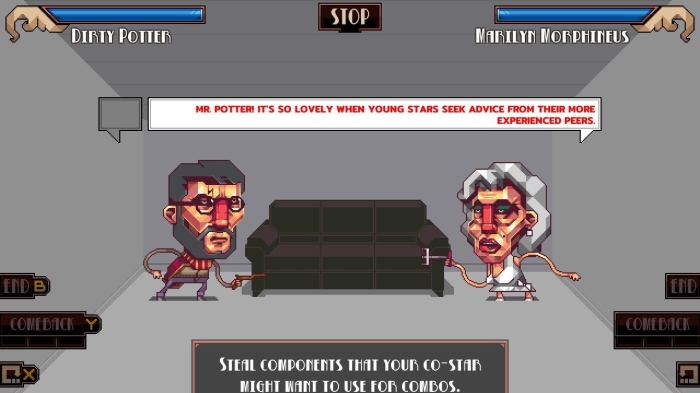 As you are forming your insults you may run out of words to choose from mid-sentence. Luckily there are more options available. Every sentence you try to put together gives you the opportunity to pick from two options your opponent can’t see. This will help keep things off balance and throw off your opponent at times. There is also a comeback feature which builds up as insults are thrown at you. Once the bar is full you can use the Comeback and it will add a final statement to the end of any sentence giving you a bigger score to work with. You may be behind but you are never truly out of it (until you get insulted some more and you lose and you have to start again, of course).

You can choose between Career, Two-Player, or a quick match mode, which is self-explanatory. Career mode allows you to choose a character and go through five (5) matches against various opponents.  The opponents have specific weaknesses that you should try and exploit but once again it never seems to work out the way you think it will. As well, there are checklists for each match that you are trying to accomplish. Items such as win, don’t have less than half your health at the end of the match, or use only a specific amount of insults. It is a neat way to try and add replay value but you won’t really want to go back to an old match over and over again. The game doesn’t engage you like that at all. In two-player mode it is you versus either a friend or someone random. It was quite hard to find a match but when I did it felt like I was playing against the computer anyways.

When forming sentences I found it to be utterly boring and a mundane task. There were lame lines and awkward jokes thrown in. A lot of people won’t even understand half of the references. Also, I found that the grammar police were on high alert throughout this game. I almost wanted to rename the game ‘Oh… Sir! The Grammar Simulator’. Countless times I found myself with a perfect line to go with my sentence only to have the game tell me I was grammatically incorrect when I clearly wasn’t (I triple checked each time).

Oh…Sir! The Hollywood Roast tries to do more with the theme and setting of the game but didn’t really do anything for being a game in itself. The boring gameplay and lack of true polish leaves this title worthy of a bargain bin immediately. Sorry sir but your games are so bad that they didn’t deserve a second chance.