Back in January of 2018 (yes, not too long ago) there was a little indie platformer called Celeste. It took many by surprise and quickly became a lot of people’s indie game of the year. The art style, music, gameplay, replay value and even story were brought together so beautifully that it was hard not to fall in love with it. Following its success, I was surprised to see very little in terms of game replicas especially since we live in a modern age of making a quick buck off of other people’s profits. After a couple months of wondering if another game would be released that would give the same fast-paced platforming rush, Shio, developed by Coconut Island Studios, came out of nowhere and believe it or not it actually feels really good to play.

Shio is a challenging but fair platformer that has you practicing your ninja skills jumping from lantern to lantern traversing handcrafted puzzle sequences while avoiding obstacles along the way. The art style reminded me of Guacamelee at times and I really enjoyed watching the animations flow so effortlessly. The really interesting part about the puzzle sequences is that instead of breaking them up into separate levels they decided to give you a ton of challenges and sequences together in a single chapter. There are 4 chapters to get through but the ability to not have to exit the level to move to another puzzle makes the game flow quite nicely. 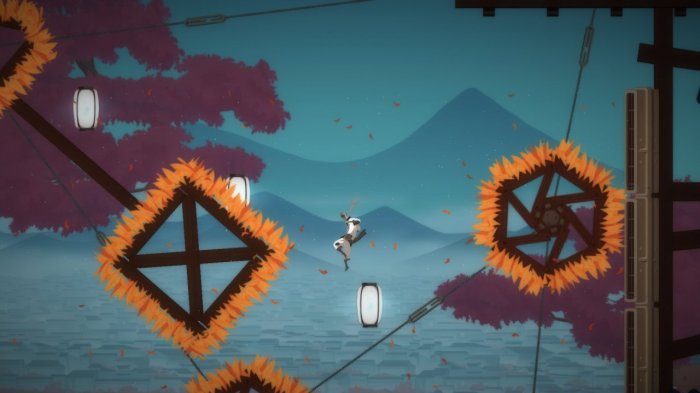 There is a story here but it is quite complex and utterly disappointing in how it is presented. Honestly, I had way more questions than I had answers by the time the credits rolled. Was it real or was I playing in someone’s dream? Why did I keep putting on a mask? Was I my own daughter? Why did I sometimes control a little girl who annoyingly walked super slow across the screen only to tell me nothing about why it happened and move onto the next chapter? Why is there even a story if nothing is explained? The story is definitely a mess. They were trying to tell a serious and compelling tale but missed the mark on the presentation. You will end up skipping a lot of the dialogue text and just focusing on finishing the puzzle sequences.

You are required to make perfect runs in each sequence before you can move to the next. In order to do this you need to be quick with your reaction speed. There is only one action that is necessary in this game and it is your jump. Chaining from lantern to lantern gets you through. However, one missed button press or wrong turn brings you right back to the beginning of the sequence. Thankfully the game doesn’t go into a loading screen or make you restart the entire chapter upon death. When you die you just quickly get teleported back to the beginning of the sequence to try again and again. 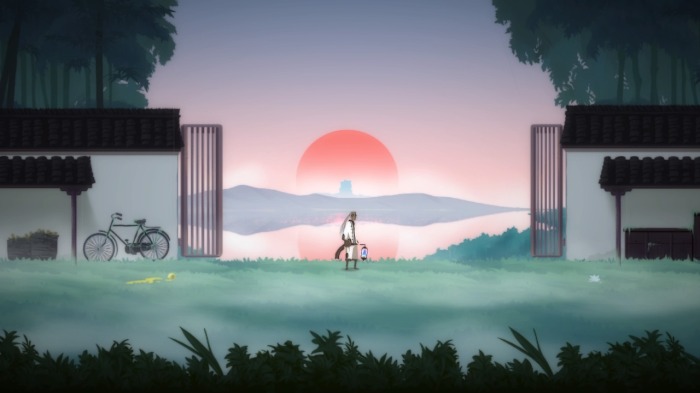 The game helps you out by showing you the sequence in a hand-drawn image that you can scroll through before doing a run yourself. This introduces strategy and makes you feel more prepared before falling to your death a dozen or so times on the first few jumps. The puzzles are smart and are mostly solved in one way but there are moments where you can miss some lanterns and save yourself by turning in just the right way as your falling. This is why there are checkpoints within sequences. They didn’t want to make the game too difficult now did they? On the easier mode the checkpoints are more frequent but on the normal mode you will have to make it further without much help. It is the art of the puzzle game and it is in full force here.

Obstacles such as fireballs, spikes, cogs, crumbling platforms, moving lanterns, etc. impede your path to freedom and you are going to die hundreds of times trying to solve some of these sequences. It is what the game was made for. Making your way through an entire sequence only to miss a jump so close to the end will leave you cussing at the top of your lungs but for some reason in a good way because you never really feel like you want to give up. You know you can do it you just have to figure out what you did wrong on that last miss. Welcome to the Dark Souls of platformers. Just try not to break another controller this time.

Games like this warrant collectables but Shio doesn’t go that route. Instead they give you a time challenge. Once you beat a sequence it tells you your time versus an arbitrary one they made up. It gives you a little extra piece of incentive to perfect a run in the fastest way possible. It would have been nice to see some additional reasoning to go back to each part but sometimes you just need to make a game for what it is meant to be.

Shio is a hard game to place. It is nothing special but it offers a lot of what a game like Celeste has in terms of gameplay. The fun is there but the elements that surround the fun are missing. A messily presented story, lack of true replay value and awkwardly added scenes that slow the game down to a crawl detract from what could be a complete experience. I still enjoyed it for what it was and if you are in need of another fast-paced and challenging puzzle platformer then this is a bargain for you.