The first thing I heard about Moonlighter was ‘Recettear mixed with Zelda’, and immediately I knew this was the type of game that was perfect for me. For those unfamiliar with the initial game, it involved delving dungeons and managing a shop, and both combat and your shop keeping role had a considerable amount of variety involved. That was over ten years ago, so I was excited to see what all that time and the golden age of indie development had brought to this style of game.

Then I made the mistake of playing the game, and I can barely contain my disappointment.

First impressions were very positive. The dungeon seemed pretty interesting with lots of room for randomized events, there was a story told through the notes of former delvers rather than conventionally, and the combat itself was far more fluid with an easy to use control scheme. The shop keeping role did not seem like too much of a deviation from Recettear’s, and with a niche enough style of game keeping what works is generally fine.

I was very enthusiastic about how this game was going to surprise me the more I played with its depth. Hours later though, I finally came to the crushing realization that there was no depth. 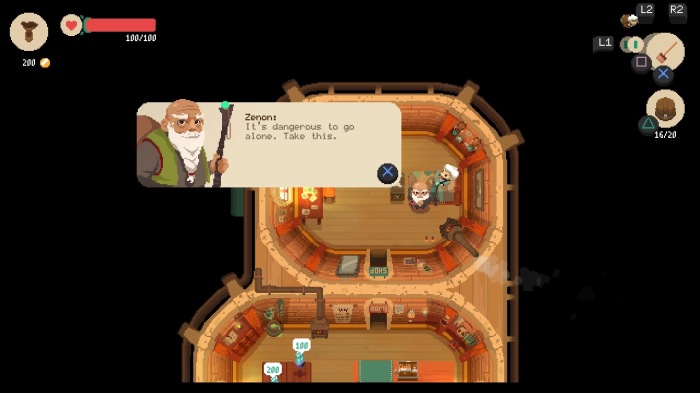 I’ll start with visuals and sound. The game has a very nice retro look to it, and with a few exceptions where things in the foreground and background blur into each other its vibrant and with a simple but satisfactory soundtrack that grows a bit more intense the deeper you go into the game. Nothing award winning, but it works well with what they were going for. Monsters look unique and generally you have an idea of what they do when you see them. The same can’t be said of the boring cast of NPCs and the main character, who have an imitation Zelda vibe but none of the charm of either of the games formerly mentioned.

In a game about delving through dungeons, picking up and selling loot though characters probably isn’t what will make you buy this game. The lack of even a basic story though makes this a game that would have to stand tall off its gameplay.

For a game this simple, it breaks down into level design, combat and using your store. Level design itself is quite simple; random rooms with chances of secrets, filled with monsters and treasures. For an endless loot grind game, that’s adequate, but by this point a bit of differentiation between rooms or even different dungeons might have made the dungeon more exciting to explore- which it really isn’t.

Combat as mentioned seems at first to be the game’s strongest point, which is something that can make any other flaw pretty much moot. However, it’s so shallow it hurts. There’s no tools, no interesting ways of approaching combat- every weapon has a regular attack and a charged attack. While there is difference in the swing arc and distance between weapons, four of them are very similar in how you fight, and only the bow provides a slightly different play style. It’s hack and slash combat at the most basic possible- so basic that it makes the Zelda game that came out over thirty years ago look complex in comparison.

Enemies do have some strengths and weaknesses to exploit, there is generally little to no strategy necessary until you reach the bosses, which are some of the most nostalgia inducing and enjoyable parts of the game. There’s no puzzles or traps or real interaction with the world you’re in, and while the game is a rogue like it does not feel like there is much to talk about. You lose some of the loot you earned if you die, but that probably won’t happen often.

What truly ruins this game though is its second feature, the shop keeping. This part of the game not only is shallow and boring, but by design it makes all the positive parts of the game dull simply by existing.

At first, there is some fiddling around to find the best prices to sell items at, then you sell items at that price… and that’s it.

You are farming trash drops to sell for gold- this is a game about doing the literal most boring part of MMOs, a genre already known for being grindy and time consuming. Except it’s worse. Instead of going to a shop, selling your junk and continuing to fight enemies- you have to take the time to individually sell your trash items.

In most games they even have a ‘sell junk’ button that instantly gets rid of all the garbage in your bag because players hated even individually clicking on each item- but in this game, it’s a process that takes several minutes.

If there was some depth to it, some charm or plot driving it the shop keeping portion could have been enjoyable albeit niche, other games have done it after all. If you’re going to make it this shallow though, it just becomes a dull waste of time and it would be better to simply not have it in the game at all.

Because you’re now spending half your time doing this, and you need to be doing this to fulfill the growth part of the game- making your town bigger, getting better gear- the game becomes grindy, especially to start. Remember how I said earlier that this part of the game makes the rest of the game worse in some sort of horrible reverse synergy?

Dungeons that might have been interesting to go through in a few tries you’re instead spending dozens of trips. These aren’t challenging, but your bags fill up so fast you can’t get through the first floor without having to either discard items or go back to town. If you want to progress, you’re either not picking up loot and doing bag management every couple minutes, or you’re paying a hefty amount to get a portal back to where you were.

I shouldn’t feel annoyance whenever I pick up loot in a game about picking up loot! By the time you get through an area you’re going to be so sick and tired of the visuals, the monsters and the hack and slash combat system that any charm that was there has long rotted away.

You can’t even just go back to town, sell and get back to the action because now you have to initiate the shop keeper mini-game. It results in pacing that is just agonizingly tedious. It’s grinding amplified to make the grind even worse, and there’s no pay off waiting for you. No rare drops or unique gear, progression’s as linear as possible.

The game’s longevity comes from the grind. Your role as shopkeeper is shallow and at no point fun. The combat system’s flaws might have been hard to spot in a quick paced game, but due to the slog even that is ruined.

Thus, the game ends up being bland, and soulless.

I wish this game was better, because from the initial description it sounded like the kind of game that would be perfect for me.

Due to the game’s niche market, despite being overall mediocre it should still be appealing to those who simply want a game of this style with solid controls, as well as those who enjoy simply grinding trash mobs for vendor trash. I can’t recommend playing it, but it may be one of your few choices.