Attention all Playstation trophy collectors (specifically Playstation Platinum Trophy collectors): what if I told you that there was a game out there that could net you a Platinum Trophy in under an hour of gameplay? You would probably think it was automatically a terrible game at an extremely cheap price but you would want it anyways because you have no self-control and you drool at the thought of that next easy platinum. It may surprise you that Survive! Mr. Cube is an easily achievable platinum but it comes at a price unlike another quick platinum *cough* My Name is Mayo *cough*.

Survive! Mr. Cube is a 2D rogue-like created by a small Korean development team named Intragames. Right off the bat you might be turned off by what seems like hand-drawn conceptual images presenting you with the story of the adventure you are about to embark on. This presentation method is so bad that most people would close the game, uninstall it and move on. I was so worried that the game was going to follow this design and I almost didn’t go any further myself. Fortunately, I held on for a little longer and actually found a game that has potential. The graphics are not great and you get kind of bored at the basic cube aesthetic that everything has but it is what it is. It doesn’t try to be something it isn’t. This is a game that seems unfinished and could have been much more but isn’t terrible at its core. 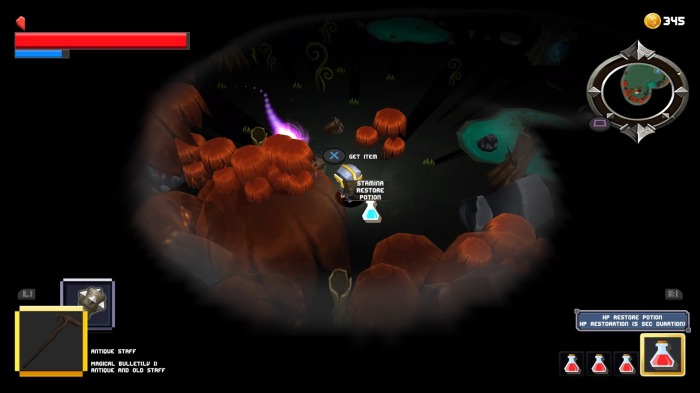 You start the game as a randomly selected cube character with a randomly selected weapon in a top-down view. You wake up confused at what to do but a small yet simple tutorial gives you the basics of your controls. There is also a portal to go through and as you enter it the real adventure begins. Using the right stick to swing your weapon in any direction you must traverse the different areas killing any enemies in your path. The areas are dark like a fog of war but as you move you uncover more of the area and this is shown on your mini-map. The goal is to find the various portals in each area and traverse through them until you find the final boss. These are procedurally generated and each one is basically a new chunk in a maze. The boss is in one of the chunks of the maze but you don’t know which one until you find their gate.

There are a vast amount of characters and weapons you can start with or find along your way. Some are vastly better than others and you will be overly disappointed when you start with a really bad one (like the level one axe that you swing around in a circle versus the level 3 lance you can one-hit enemies with).You could also end up with a shield and this can become very important if you wish to defend against specific enemies along your travels. I really liked that I never really started with the same character twice. There seems to be a vast amount of designs for characters that will make you feel like you are playing with someone different each time because they come with their own amount of health as well. You will also run into these various characters in the game but they are NPCs. These are no ordinary NPCs though because they seem to come at you with vengeance in their eyes. What did you do to them to make them hate you so much? Are they trying to find the end just like you? Why are they so powerful? Did I just die in two shots from a flaming sword weapon? I want that weapon! The game seems to play differently every single time because of this and it can be both rewarding and frustrating at the same time. 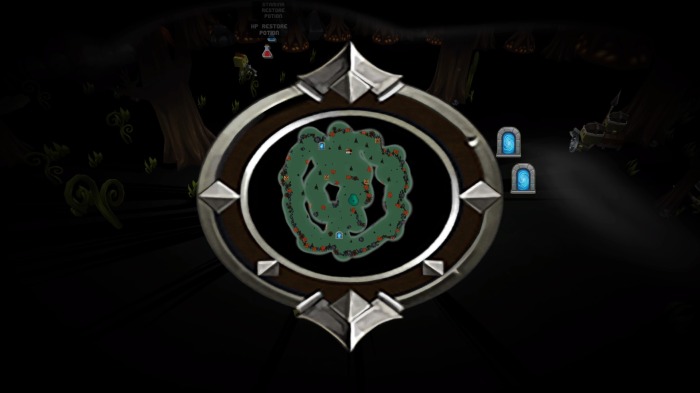 Enemies such as beetles, wild hogs, goblins, and goblins riding wild hogs are spewed across the first ‘level’. These enemies, once defeated, give coins, which you can spend on getting a random weapon, potion, permanent stat increase or heart container from the ‘portal-keeper’ when you start a new character. Your coins are the only thing that seems to persist so you should spend them wisely. It is important to keep in mind that there is more than one level so to speak. Once you defeat the boss of the first area you get teleported to a new maze that has a different theme with new enemies. I really enjoyed the fact that there was a change of scenery and enemies in a new area because this freshened up the gameplay after it almost became repetitive.

Scattered across the areas are chests that you can open to gain items such as potions (health, attack up, speed up, stamina) and permanent stat increases (health, stamina, speed, recovery).  You will find the permanent increases in gold chests hidden in harder to reach sections of each area. I found myself holding onto three health potions and one stamina potion or attack up potion for a majority of the game because the only time I needed to use the latter potions was when I found the next portal and had to break it open quickly to progress. 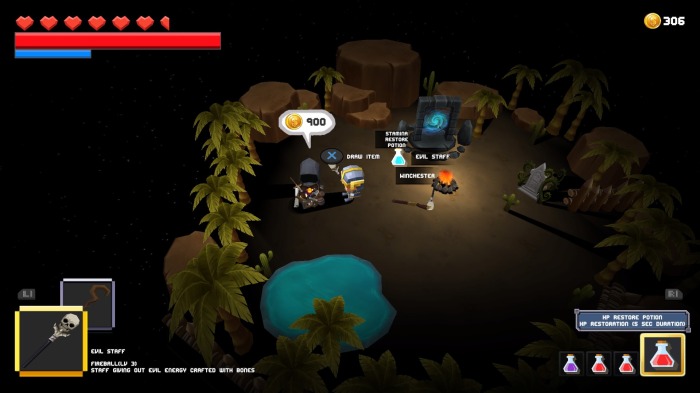 My biggest concern for the game, aside from the poorly presented story, was the inability to escape my impending death on many occasions. I could make tremendous progress on my character and feel like I was going to make it to the end when all of a sudden a random cube NPC with a crazy weapon would find me and one-shot me out of nowhere. This left me not only feeling frustrated but also feeling defeated and not wanting to try again right away. There is no way to tell how you are doing against an enemy so you are just guessing as you try and get as many hits on them as possible. An enemy health bar would have been great here. The bright side on this sad situation is that if you do eventually defeat one of these overpowered foes you will be rewarded with their super powerful weapon or a stat increase item or even a heart container that will give you a refill on your health if you happen to run out from being slaughtered by an enemy. It actually makes you feel great once you get one of these NPCs down but some of them have really bad weapons as well although in their hands still seem to pack a punch for some reason. The frustration is real.

Finally, let’s talk about the trophies. This game gives you trophies in bunches. You basically just need to play the game for 10 minutes and you have nearly 50% of the list. Defeat enemies, die, buy items with coins, defeat more enemies, use certain weapons, and make it through a certain number of areas are only some of the very easy trophies you need to obtain. The platinum trophy takes less than an hour to achieve and if you are one of those die-hard platinum trophy gamers than this game is definitely for you (except at a steeper price than some of the other easy platinum trophy games). 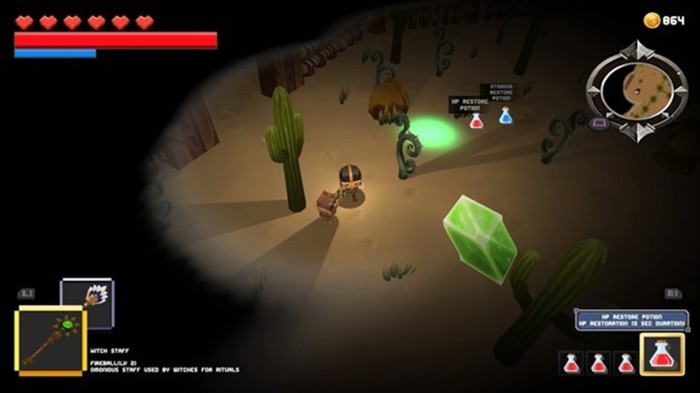 All in all, Survive! Mr. Cube is not a bad game. It may present itself poorly at the start but it has enough variety in it to make you want to keep going even after a lot of the frustrating deaths. You will want to experiment with all of the weapons to find out which one suits your play style. They could definitely add some more depth to the game by adding events and more items but I admire that they chose to be something specific and focused on that instead of just adding features and mechanics for the sake of it. You will continue to trudge through the areas looking for that final boss even if it means dying over and over and over again just to do it. In the end the trophy is worth it isn’t it?