For those who remember NBA Jam, it will not be a surprise where the inspiration came from for this title. For everyone else, NBA 2K Playgrounds 2 is an arcade style basketball game where you take to the court in a 2 on 2 setting. The emphasis is on the term arcade as the game drops many things that the sport would call violations in favor of power ups and over the top bells and whistles that defy what is physically possible.

The game boasts a wonderful presentation with everything being done through a bold, bright and colorful approach. Even the menus have been kept simple and clean in order to make sure that navigation is given a feeling of welcoming. Obviously, opinions will differ when it comes to the caricaturized player models but they really do fit the game thematically. Of course, as in almost all sports titles, the top tier players have been given a lot more time and attention in an effort to have them reflect their real life counterparts while others will require the aid of the names and numbers on the back of the jersey to be identified. It’s not anything new but it screams lazy when reference material is easily available.

Another thing that needs to be commented on is player’s roster placements. It’s understandable that an active player like Vince Carter would be associated with the Toronto Raptors due to the impact he had on the league at the time but why is Demarre Carrol?  You could argue that it’s not up to date but Danny Green is still a Spur while Kawhi Leonard is not…it was the same trade. This is however far from the biggest issue with the players but I will get back to that. 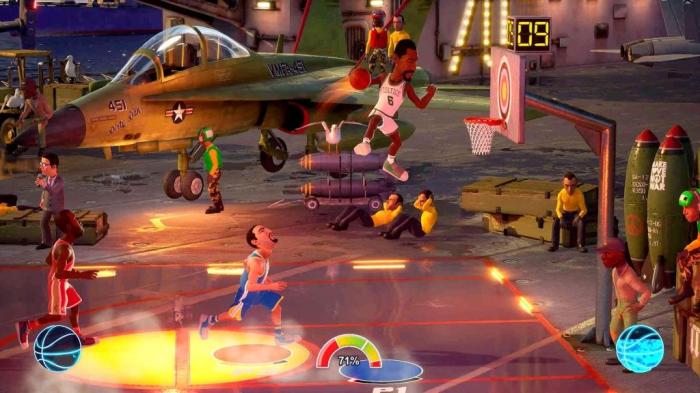 Let’s look at the gameplay, it’s mechanically fantastic. The control scheme is simple enough to pick up and play since things like a cross-over can be done with the flick of the analog stick plus handling is smooth and responsive for all player movements. It ends up being a lot like expected, heading to the basket with no defender in front of you? Press the turbo button and then the shot button and you will sail 30 feet in the air while back flipping and come down with a thunderous dunk. Some might have an issue with the shot bar since it does require timing to be efficient but there is nothing wrong with infusing some additional skill to the depth of the game.

There is also the addition of a few temporary effects calls lottery picks that can be of the beneficial or detrimental nature. For example, you might gain unlimited turbo for 30 seconds or give your opponent a short period of time where their shot clock ticks at twice the speed. It really changes things up a bit when you can’t just score a basket because it’s been iced over and you need to attempt 3 shots or 1 dunk to break it.

On paper, the game is fine but you quickly realize just how hard they tried to make it difficult to reach that point. Upon first booting it up, you will be given a few bronze card packs which will net you 4 players per pack. They are random however, so don’t expect to be able to just pick your favorite player from the go. This will be enough to play some exhibition games as you don’t need to pick players from the same team and that way you can start accumulating in game currency to buy more packs. You can also gain this currency from the season mode which does however require 2 players from the same team to start. If you don’t have that they will graciously give you 2 from the team of your choosing, but just the first time. So if you want to do a season with a second team, you better hope you got lucky with the card packs or that you have succumbed to their clear intention of you opening your wallet for the purchasable full roster unlock.

So you have gone through all of that and have some of your desired players. You start into a game, take off for a dunk and clunk; you hit the rim and fall on your butt. You think well maybe a player like Blake Griffin isn’t a proficient dunker so you decide to spot up for a 3 with Klay Thompson. You dribble to the corner, initiate the shot, watch as the bar climbs and hit the button within the indicator only for the game to tell you that it has a 23% chance of going in and then hits the side of the backboard. You might have gotten the characters you wanted but they all start off in the bronze stat level and require experience obtained through use in order to level up and become useful.

I guess it’s time to grind, like you just did to get the currency needed to buy the packs to get the players.

Once you have spent enough time missing shots and crawling for wins to hit the gold stat level you take a look and see that your ability points still aren’t quite on par with where they should be. It’s at this time you see that there is one more level, the diamond stat level but it’s not obtained by gaining experience. No, for this you need to complete set player challenges, in the order they are listed, in case anyone is confused why they aren’t completing like I was. Some of which are just unreasonable for the time that you have. Say for example, you need to block 2 finger rolls within a season game to get your final stat, good luck because you will spending the majority of the 3 minute long game hoping your opponent even attempts one, let alone that you are in the position to block it.

Get it completed? Good, you have done one character; now start the process all over again.

Also, when it comes to the challenges, there is no spot in the pause menu that you can just quickly check what they require from you. So if you finished one, you will have to navigate out to the main menu and pull up your collection in order to see what’s next. It will add a lot of load times since they usually jump back and forth between needing to be done in exhibition, season mode or even the 3 point shoot out. The challenges should not have been tied to stats, vanity items or currency bonuses at most.

Once all of this has been done so that you have at least two characters you enjoy using you can finally start playing game like NBA Jam let you right out of the box. That is, for fun and without all of the grinding and specific challenges in the back of your mind.

I can’t say this enough. NBA 2K Playgrounds 2 is one of the most fun games I have reviewed that I cannot recommend. It is the modern day equivalent to NBA Jam but with an extensive amount of grinding required to get to the fun parts.