The world of Tamriel continues to grow and has now come face to face with its biggest threat yet. Elsweyr marks the third expansion chapter to the ever popular Elder Scrolls Online. With it comes an exotic new land to explore, a dark new way to play and the long anticipated appearance of one of fantasy’s most well known creatures, the Dragon.

It would seem only appropriate to begin with the new province that players will be adventuring in, the titular Elsweyr. Not having been seen in video game form since The Elder Scrolls: Arena, the Khajiit homeland is a sight to behold and has been beautifully recreated. While it appears to be slightly smaller in size than the lands visited in the previous chapters, it is actually denser with play area since it has limited the amount of space that is blocked off by invisible walls.

There have not been many times where my questing in Tamriel has been halted by a desire to just stop and take in the beauty of the visual design in the game but a few of those were in Elsweyr. While it has been par for the course for any new content to include a number of skyshards to hunt down, few have been as enjoyable to me as this time around since it gave me reason to further immerse myself in the environment. There is everything from warm green lands in the north to the hostile deserts complete with added verticality due to a chasm system in the south. Even things like the time spent in public dungeons, particularly one that resembled a more necrotic apothecary, contributed to the variety of the province in order to keep visual fatigue to a minimum. 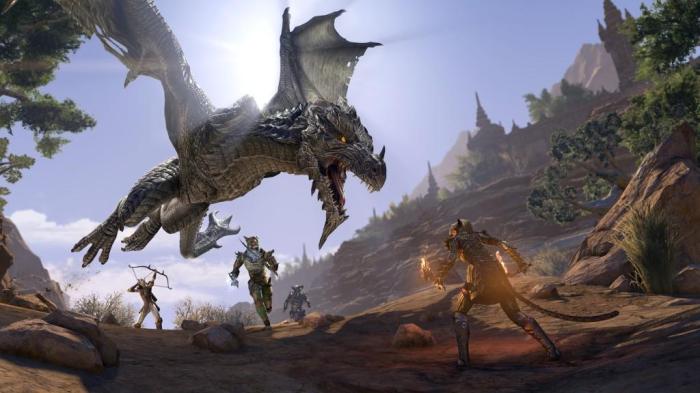 Of course, it is not as much about how it looks as it is what there is to do there. You will find your typical bevy of activities like the previous mentioned skyshards and public dungeons but also the checklist of others that any seasoned player could have predicted like new lorebooks, points of interests, public bosses, delves and a new raid to discover. There is one more notable addition to the regions activities but we will get back to that shortly.

Before that, let’s talk about why we are on this new continent. It should come as no surprise following the events of the Wrathstone dungeon DLC and considering that all updates this year fall under the ‘Season of the Dragon’ that we are answering the call to help fight back these imposing winged beasts that have occupied the skies of Elsweyr. Like the previous chapters, you can take on this campaign with your current character or by rolling a fresh one and beginning with the all new tutorial, which in my opinion is the best one to date.

After either of these options, you will set foot on Elsweyr proper and set out on the new main story campaign that involves the Khajiit hierarchy, a necromancer led undead army and the aforementioned Dragon threat. This is where the chapter’s biggest weakness lies, the main campaign is rather forgettable and not nearly as epic as the long awaited appearance of Dragons would have you expect. Perhaps that is because of the lack of focus and the other story arcs dilution of the Dragons that prevents them from feeling like the prominent characters that they should be, ultimately they just end up being there. 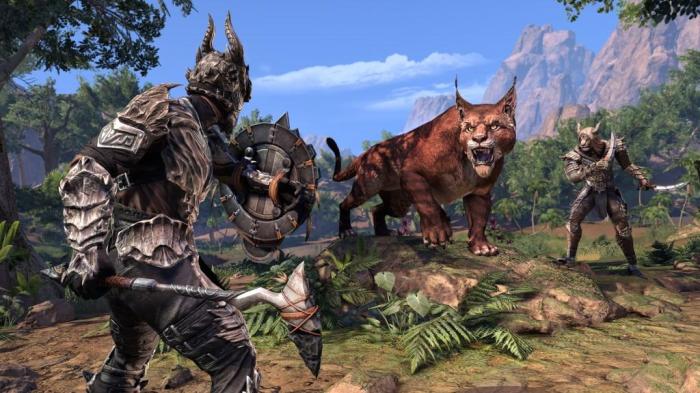 Similarly, the new world activity that has continued the trend of finding replacements for the base games dark anchors are the Dragon hunts. Public events that will see a dragon spawn and eventually land allowing a group of players to engage in battle. These are much more challenging and demanding versions of public bosses which will require larger groups as well as those people playing their role, unlike public bosses which can be beaten by as little as a couple of experienced players. While these are very fun and rewarding experiences, you will quickly realize that they are not as dynamic as they first appear and even take place in predetermined areas. I have concerns about how manageable they will be once the initial population spike due to a new expansion subsides again. It gives off the impression that like their impact in the main campaign, they will end up just being there.

I realize that it seems like I am being very critical of the storytelling but I don’t mean to be, it isn’t bad by any means, it just doesn’t meet its full potential. In fact, much like everything before it, what is here is very well written and exceptionally voice acted to its usual high standard. Just make sure you are a fan of the Khajiit and their unique way of speaking, otherwise you will find yourself a little annoyed since they are the most prominent race in Elsweyr. Truthfully, where the main campaign is lacking, the experience is more than made up for in the side quests which are amongst the best we have seen yet. This is the furthest from your boring kill x, collect y quest template of past MMOs. You will come across a wide variety of colorful quest givers with their own personalities and agendas that will send you on what feel like meaningful tasks.

If there is one place where the presence of Dragons is felt in full force, it’s the new trial Sunspire. Gather your 12 player party and head out on a challenging mission to take down 3 dragons that will test your combat mettle. Like usual there are new equipment sets to be found and achievements completed in order to earn titles, a skin and a mount. None of these will come easy but I had a blast running through this raid with my guild which makes the pursuit just that much more enjoyable. If there is one knock I experienced, it would be the couple instances where going through a door would lead to a blind pull while the rest of the group waits to load in. It’s a small gripe but one that the level designers could have easily avoided. 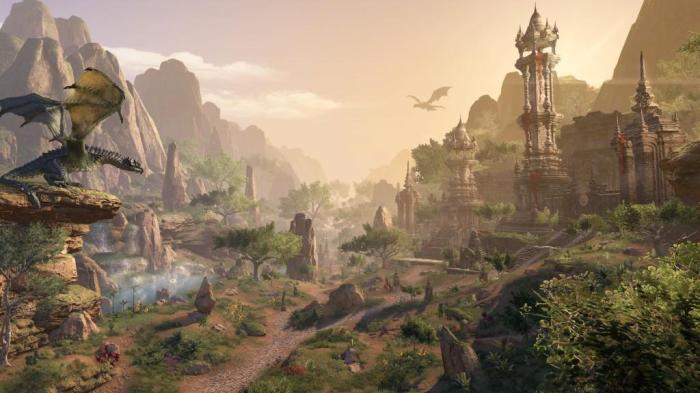 For veteran players, everything I have discussed is great for the most part and they didn’t need a review to assist in their purchase decision, but what about new players? What reason is there for them to make their initial dive into Tamriel with the Elsweyr chapter specifically?

The answer is not found anywhere in the actual content since as refined as it is, does not need to be played before any of the other hundreds of hours of content already in the game but in the new character class, the Necromancer.

It is only the second additional class released since the initial launch of The Elder Scrolls Online. Unlike the warden however, their elevated power can be felt immediately, so much so that I would not be surprised if a nerf in issued in rather quick fashion. Power aside, necromancers are a very fun and unique class who can summon the dead to fight by their side and make use of corpses to activate certain abilities. Be careful however as the dark arts are frowned upon and activating certain ones within town borders can draw the attention of local law enforcement marking the first time that character class skills are directly associated with the justice system. I chose to focus on the Bone Tyrant skill tree and found myself playing a versatile tank with more self sustaining ability than I was used to but in truth the necromancer can excel in all three player roles.

Overall, the Elsweyr chapter is a great addition to the game world of Tamriel. Veteran players have no doubt already spent plenty of time exploring every nook and cranny of the Khajiit homeland and didn’t need a review to sell them on the package. New players however, might not find the necessity in beginning their adventure there but should keep in mind that many of the options to purchase the chapter come in a bundle with at least the base game and it is the only way to play the wonderful necromancer class.