The Sinking City is a narrative-focused investigation game developed by Frogwares and published by Bigben Interactive. This review is based on the PS4 version of the game. Set in the 1920s, you play as the Navy veteran and private investigator Charles Reed who freshly arrives on an old barge to the fictional town of Oakmont. Mysteriously ravaged by a flood, water is not the only thing washing up on its shores. Some local residents are plagued with strange visions and terrible nightmares, others are deteriorating into madness, and some simply vanish during the night. Reed has been a sufferer of visions himself, and all of his digging into their origin has brought him to the illusive, rotting hovel that is Oakmont. Lovecraftian mythos is a major inspiration for the events surrounding this game; whether or not they were implemented in a way that made them a requirement, I remain doubtful.

During my playthrough, I spent most of my time adventuring and putting together clues to get to the next investigation hot spot.  Talking with locals to gather intelligence will give you an idea of where to go in Oakmont. A fairly large in-game map lays out street names and separates the town into districts. Aside from a few markers like the Police station, City Hall, Library, and Hospital, the game expects you to place your own waypoints based on your conclusions from investigating. The city’s streets have flooded. Getting around involves using boats found at rickety docks and wandering the streets whilst reading city signage and referencing the map. The boats are free to use, and are often the only way to get into certain locations.

After arriving on a scene, clues come in the form of conversations, physical evidence, and objects strewn about various homes, alleys, and businesses. At times your human eyes are not keen enough to unlock the secrets of a crime scene. Hitting down on the D-pad will change your view to “mind’s eye” mode, which allows Reed to see otherworldly objects (called omens) and follow these otherwise invisible signs. During some cases, when all key evidence has been gathered, Reed can perform “Retrocognition”. Walking through the crime scene, he is able to piece together a few key events that occurred. If the player can sequence them correctly, new evidence is added to the casebook file and that evidence can be used to further investigations.

Most clues point clearly to another character or place that can be easily found on the map. Other evidence is much more complicated, and Reed will need to visit a city archive to process the gathered information. For example, City Hall has an archive on general information about citizens and organizations. Police stations and hospitals will contain information on crime or specific injuries. Deciding which archive your casebook clues are best used in requires careful thought, as no hints are given to the player outside of the information in the casebook file. A casebook file must be active in the archive screen, and then choosing three criteria to search the database may reveal a new clue.

Personally, this lead to a few mistaken visits to the Newspaper archive when I should have gone to City Hall, which was certainly wasted travel time. However, it always felt like the answers made sense when I came up with actual results. One of the more interesting parts of the casebook is the ability to make choices on how detective Reed interprets the information. For example, choosing whether or not you believe someone can change how you present information to quest givers, drastically altering the game world and certain character’s fates.

Occasionally, combatants will present themselves while you are doing your investigating and must be dealt with appropriately. Combat in The Sinking City is stiff, and a little awkward. You begin the game with a pistol for ranged attacks, and a spade attached to your rucksack that is used for your melee swipes. Bullets were said to be a limited resource, so I spent most of the game swinging my spade at anything that challenged my investigatory progress. This is where the movement controls rear their ugly head. Walking around examining evidence feels fine, but lining up a stride-stopping strike with the ol’ shovel in the middle of being attacked was quite troublesome.

Finding solutions to this awkward movement lead me to discover a fairly combat-breaking exploit early on. The spade has a defined damage dealing… “area” in front of Reed’s model; if there happens to be a wall, fence, door, or bench in this space along with the targeted enemy, Reed is fully protected behind cover while all enemies feel the Spade’s wrath. Running away and angrily shoveling the corner of a wall or doorway was quite effective in most combat situations, but lacked the honor of a real victory.  As the game progresses, a number of firearms become available for general use. By that time I had fully upgraded my ability to swing spades with premium efficiency, and did not find any real need for the expanded arsenal.  Occasionally, I would break out a shotgun or grenade to dispatch heavier foes, but this was only to prevent taking any potentially lethal damage; avoiding any unnecessary load times. 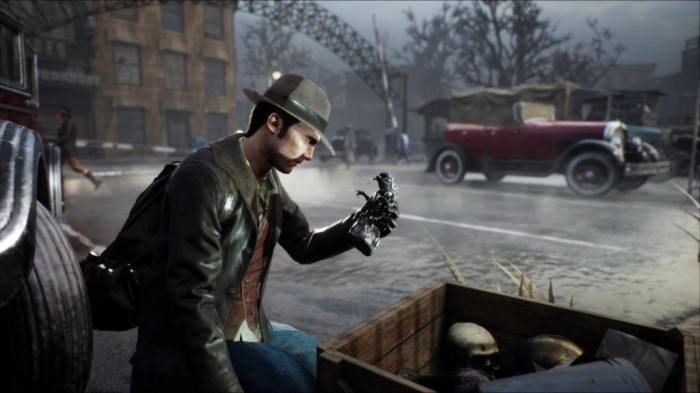 The initial load on a save file can be around a minute. Quick travel around the city can cut that in half, with deaths feeling almost as long as initial loads. Another performance issue was not having frame syncing with video output, which caused screen tearing during the majority of gameplay. When travelling the city and moving with any haste, it was common to see dramatic pop-in of city components and texture details. Then again, most of these issues faded from view the more I played the game. I’m not sure if the madness had taken me, or if the quality of the crime scenes, conversations, and citizens of Oakmont has me partially forgiving of minor gripes.

The Sinking City, for all of its faults, is an enjoyable game. Solving cases, making choices, and piecing together the overarching mystery made for a great adventure.  While the Lovecraftian themes determined the types of monsters you encountered and easily defined the themes of madness, I didn’t feel it ultimately was required for the game’s setting to work. I think that’s why I enjoyed my time with The Sinking City; the core gameplay loop was well designed and fun, regardless of the setting (or any technical difficulties).