Sometimes, keeping it simple is best. And nothing is more simple than a turn based strategy game without strategy.

Perhaps that’s being a little harsh on Warhammer Quest 2, but it’s not being inaccurate. The concept is incredibly simple- you go into dungeons, you open rooms which have enemies, you kill those enemies and then you loot three items and or people which are seemingly completely random. On my first optional dungeon I got a beast of a greatsword that was several levels higher than my party and decked in magical items that would’ve taken me half a dozen or more dungeons to buy.

For beating the entire first chapter, the final dungeon gave me junk. There is some degree of reward for doing optional dungeons that pop up frequently- they’ll tell you one of the items you get for doing them, and the ones labelled hard tend to have far better items listed than the easy ones, and also do live up to the promise of being harder. 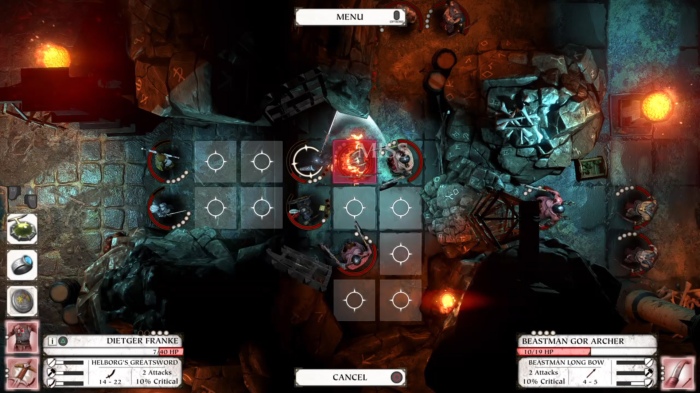 The difficulty absolutely goes up as you take on harder missions or go deeper in the story, enemies with more health, abilities and damage become more common, as well as having more weapon resistances. The system regarding resistances is fairly simple- every weapon is piercing, slashing or bludgeoning, and armour or monsters reduce some of that damage.

Every attack is one of those types, including magic, but there are some items or weapons that permit you to ignore damage resistance that are extremely valuable as going into a cave full of monsters that take 90% reduced damage from piercing weapons was making my archer useless for most of the dungeon.

There are status effects like burning which deals periodic damage and is extremely deadly early on when beastmen with torches can take your tank to half health with a single attack, and freezing which basically stuns an enemy and is the closest thing to using strategy the game has beyond just dishing out damage and using choke points. 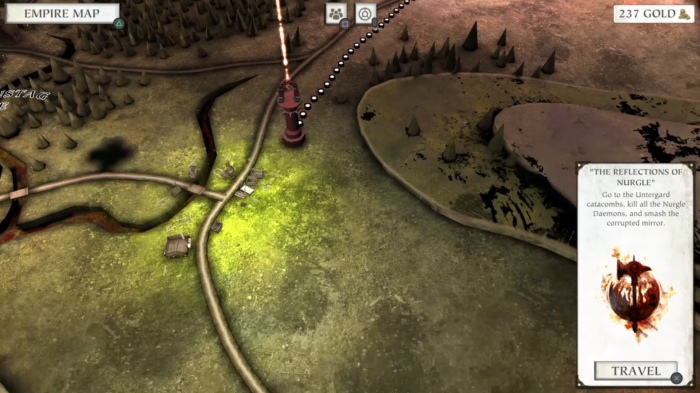 That is, pretty much, the entire game in a nut shell- you gear up your heroes slowly, you get tough enemies to go to chokes or freeze them, and you dish out damage. You’re fairly limited in what you can bring since weapons, armour, shields all take up inventory slots, you only start with 4 slots, and the rest can go to passive effects, spells or consumables. It is nice that consumables aren’t consumed- if you get a potion for example, it says three uses but that is per dungeon not in total so don’t worry about having to keep rebuying those and definitely use them to their full value each dungeon.

As a mobile game ported, I think this ends up being a good time waster. The music and sound is fine, creating good ambiance and the impact behind attacks feels really good, the mace especially sounds like a shotgun going off and destroying an enemy feels satisfying. It will feel grindy and like you’re doing almost the same thing all the time, there’s an average selection of map looks and different monsters to kill.

It is at its base a very average game, however it is an average game done well. I only ran across one bug in the substantial time I played; which was when my Breton knight who has riposte, which lets him counter attacks, was stunned by the freezing effect, then was attacked while frozen yet procced the riposte. The game didn’t know how to continue, stuck thinking this guy needs to counter but can’t and it just sat there for several minutes before I turned it off. Ironically, the freezing effect can freeze the actual game itself. Luckily, it saves after every turn so I just reset. 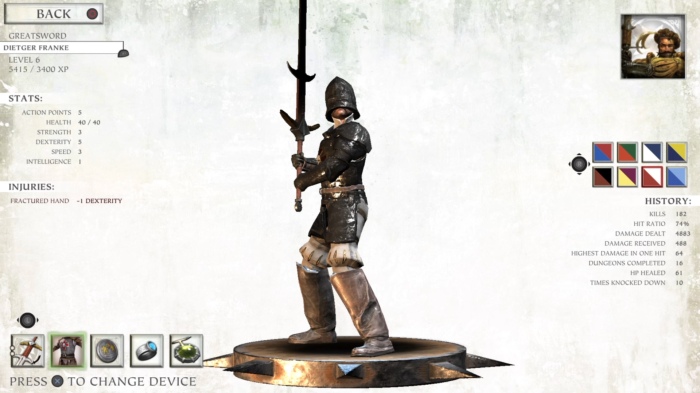 Top tip if you give it a try, you can switch characters with shoulder buttons, and you can move them while others are moving. Since between rooms you have to move each character individually that can be one of the most annoying parts of the game, just getting everyone to the next door by moving them manually, so doing them all at the same time makes it much faster.

Overall? It’s a very basic game, but that’s what they’re going for. It’s gritty, a bit ugly, but it feels Warhammer and it looks fine from the top down view, though when you go to the menu the character models are pretty hideous, I’ve seen better in ps2 games. If you want a simple time waster that does it well, this is a good game to pick up cheap.