My expectation for indie titles is not to produce a triple A game, but to do what you can within your limitations. So while I cannot fault most RPG maker titles for looking and sounding the same, they feel amateurish and stale when you finally come across something that’s done everything differently. Ara Fell is one such game where they’ve made the most of their limitations.

With the appearance of a Super Nintendo title like Illusion of Gaea, and fairly standard RPG combat if this had come out during the golden age of RPGs it would have fit in very nicely, perhaps only penalized by its length. Each character has specific skills that fit their role, there is mild customization but basically you have a tank, support, dps and hybrid character in your party. Combat allows for fairly decent battlefield control between use of debuffs, buffs, taunt and once charged an ultimate ability that uses a shared resource. 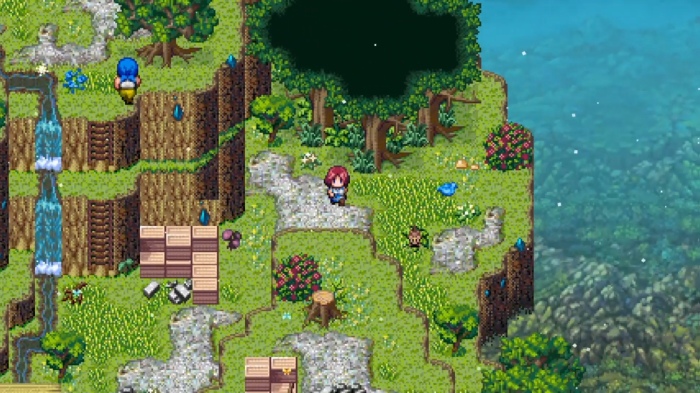 The pace is kept fairly quick and battles are able to be individually balanced making encounters somewhat more challenging, and with four difficulty levels that challenge can scale quite high. Other than injuries sustained by falling in combat, and the ultimate bar which fills over multiple battles, everything is restored each battle reducing the need for party micro management greatly, while making consumables a sparser commodity solely meant to increase combat viability rather than handle the attrition of dungeon delving.

Boss fights will often have a trick to them or phases, which helps to change the flow of battle, and overall makes it feel like the entire combat system is well thought out to take into account the weaknesses and possibilities of turn based RPG.

Intelligent design in combat is often enough to elevate a game considerably, but for an RPG exploration and story tend to take up as much of your playtime, and Ara Fell is no exception. While the story itself is fairly standard, it does its job in putting you into the place of the chosen one and giving you an excuse to explore the world. Character interactions are nice, with an ample mix of touching moments, snark and heroism, the expressiveness of character portraits is a great touch in enhancing the frequent banter.

That mix of visual and conversational dialogue is a nice touch that makes the party’s relationships feel more real than many games manage to convey, and is a perfect example of doing what you can within your limitations as a developer.

But the game’s real strength lies in the world they’ve created. Being able to interact, gather, swim and open up various secrets using tools and skills you obtain make exploration feel rewarding. Every part of the world is a bit different, which is not something that can often be said with 16-bit tilesets, and while finding everything required for quests can be a bit time consuming and require some running back and forth, the density of the map and numerous teleport points make travel fairly easy.

What truly makes the game stand out though is the beauty of the world you’re exploring. The ambient snow and weather combined with the motion of critters add vitality to everything, creating a truly gorgeous world. The music even further enhances this, with a relaxing soundtrack that sounds like the game looks.

Minus the basic story and a length around twenty hours which is nice for an indie title but a bit short for an RPG, this game feels very professional especially in its appearance and music. This is absolutely a case of many small details coming together to form an overall package worth of praise, and was pleasantly surprised as my expectations when I started playing were fairly low.