When you play as many games as me or my friends do you start to see patterns when new games get released. We use commonly known terms like metroidvania or rogue-like. Foregone like many other 2D platformers can’t escape these comparisons, but is unique in its mish-mash of older games.

You start the game in a vision of what seems like the past when a war ravaged the city of Calagan. You are a super soldier tasked with defending against the threats that have now besieged the city. After a brief tutorial in this vision you collapse and awake in the current timeline to start the real game.

The world is a mostly overgrown civilization with hints towards the apocalyptic war of the past. There are broken down, rusting machines and buildings that are falling apart. Flora and fauna have now started to take over the ruins of this once great city. There are also scores of the “Harrow” patrolling the streets, buildings and caverns that make up the landscape. What the Harrow are is a mystery that unfolds as you fight your way through the world and progress though the story. Perhaps they are your fallen comrades in arms or maybe an alien invasion.

Everything is beautifully rendered in a pixel art style which is quite common these days with 2D games. The world is vibrant and colourful, but the proportions are realistic, and it actually reminded me of the old Flashback game on SNES or Genesis, or Blackthorne. Animation and movement is extremely fluid and even though pixilated everything looked very detailed. 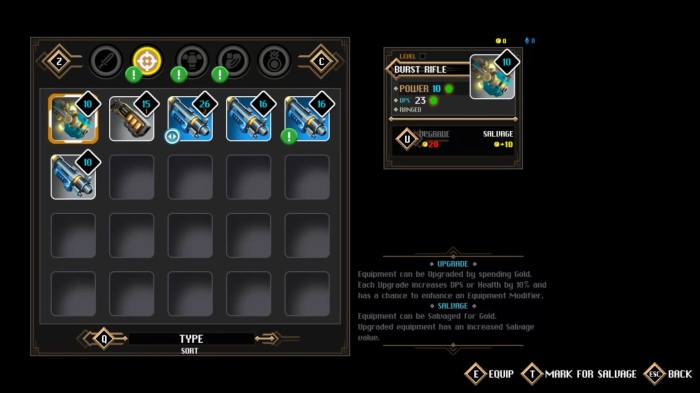 Controls were solid with the ability to slide and double jump being available right from the get go. Melee combat was quick and sliding through enemies to attack from behind felt great. I didn’t really care for the auto aiming for the gun mechanics though I understand with limited ammo for any weapons they wanted to make sure you didn’t waste shots. I still felt like I was missing more that I should be for something that was supposed to track nearby enemies.

There were a few options for both melee and ranged weapons that you could get to change the flow of combat with daggers being quick and weak, the falchion being slower but more deadly, or the shotgun being short ranged compared to the pistol. Enemies also had a variety of weapons at their arsenal with the Harrows having rifles, miniguns, spears, and swords. The aggressive fauna also had a large amount of variety with little spike shooting slugs, to giant crustaceans spawning little minions. The ranged Harrows were definitely the most difficult as their attacks much like your ranged ones would follow you often leading me to avoid one thing only to get hit by a barrage of bullets and die.

Foregone from the beginning felt like a metroidvania or a rogue-like however not long in I realized I was very wrong. Traditional metroidvania would have you gain abilities to unlock previously explored areas for power ups or collectibles, and a rogue-like would make you start over fresh when you died. I would say probably the closest analog to Foregone would be probably a Darksouls with a bit of Diablo mixed in. You unlock shortcuts from waypoints as you move through the world, when you die you go back to a Nexus where you can power up your skills and gear however you do lose all gained gold and crystals when you die so it was quite punishing in that regard. Also all enemies respawn so if you didn’t get a shortcut on your last death you’re going to have to wade your way back through all those enemies form the closest teleport you have available. Enemies have a chance to drop loot and it can come in a variety of rarities from common to legendary. These drops also have some random affixes such as +4% hit points, or +10% poison damage attached to them. The amount of randomness in what you can get is quite staggering.

Killing enemies and breaking boxes you find gold and crystals. Gold was used to upgrade gear that you found and crystals were used to unlock abilities in a skill tree. Here were a couple things I didn’t care for much. The randomness in the gear drops felt too RNG like getting a rare armor piece with a garbage affix felt all too common. I also didn’t really like that picking certain parts of the skill tree locked out others, I know other games do that as well but just never liked not being able to fill it out. On the plus side you could spend gold to respec your skills so you could try different things.

Summarily Foregone is a 2D action platformer with roots in quite a number of old school games and some newer ones. It rolls solid gameplay into a beautiful pixel styled package. Though the RNG nature of the loot is a detractor for me, it’s not that bad and still a good system overall. I enjoyed what I played so far in this early access and look forward to what Foregone has to offer when it is complete.