I really didn’t have any expectations when Space Gladiators: Escaping Tartarus was brought to my attention. I knew that I was getting pretty tired of roguelikes, which would not work in its favor, but had heard nothing about the actual game. Now, after dozens of hours and countless runs, I can say that it is easily my favorite roguelike since Rogue Legacy and would rather be in game hooked to that one more run mentality than working on this review.

Upon booting up the game you are taken directly into a tutorial that will teach you the basics of the gameplay such as jumping, attacking and checking the map. Your trainer will also serve to expand a little bit on the story. Speaking of which, it doesn’t really matter that much. What I know about it primarily came from the steam page that says “You’ve been captured and sent to entertain aliens as a gladiator in a faraway planet called Tartarus.” I could have decyphered most of that from the title but in this genre that will never be a factor towards my overall view of the experience.

One thing that I will evaluate the worth of the game on is its graphics and I am genuinely in love with these. Right away you can tell that there was a lot of care put into the hand drawn 2D style with that nice bold border look that you normally get from comic books or other cell shaded style games. It honestly reminded me a lot of The Binding of Isaac in the best ways possible. 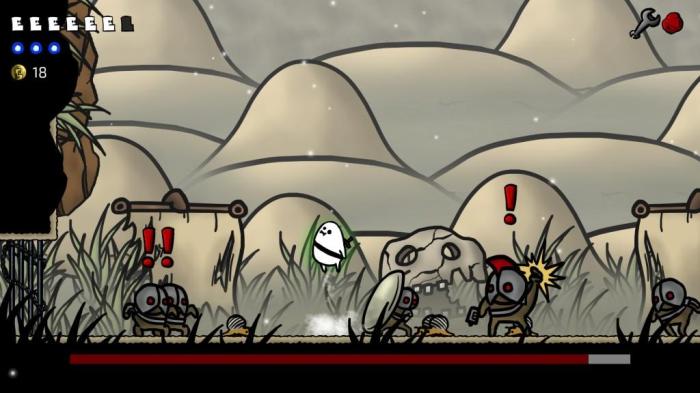 The praise however isn’t just isolated to the art style but also the presentation and direction. Running at 4k everything moved fluidly and remained crystal clear, even when there was too much stuff on screen for one person to keep track of alone. This is all taking place on an alien planet and as such the enemies, backgrounds and animations are appropriately fitting. Even enemies like the two faced wall crawlers that spit at you, which for some reason didn’t appeal to me, were well represented visually.

It did not take long into the tutorial to realize that more importantly the controls were fantastic. I didn’t use a keyboard and mouse because this is a 2D platformer and I’m not a glutton for punishment. As such, I am happy to report that plugging in my Dualshock 4 and using the native Steam configuration worked perfectly. There was not one instance of frustration that was caused by a run being lost due to poor controls or even input lag.

It’s clear that the developer was not burdened by the limitations of a bigger studio and was simply allowing his vision to come to life in video game form. How else do you end up with a player character that is a Worm in underwear, an actual bullet point for the advertising of the game, or something in the menu called waffle mode which when toggled on seems to do nothing more than change all the fruit for replenishing health in the game into waffles. There is a very obvious charm and humour in this title.

So anyway you have finished the tutorial and you are ready to begin a run. Your objective is to get to the arena fight at the end of the level and opening your map will reveal that there are a number of different paths that can be taken to accomplish this which will all take you through a series of different kinds of rooms.

The most straight forward of the rooms are ones that just involve killing a series of enemies and can vary from easy, medium or hard which will just change the number of and types of enemies you face. Trap rooms are represented by an image of spikes and involve platforming and dodging traps to get to the other side. Beyond that you will find treasure, vendor, and a variety of item rooms like the angel room that grants a free item or the devil room which does the same but at the cost of HP.

Once you get to the arena, you will be in a staging area that will provide you 3 choices for the upcoming fight. These are a variety of passive changes to your run like getting more health back from destroying hearts or destructible in the environment having a chance to drop loot. Keep in mind however that the better the rewards the tougher the arena battle will be. Succeed and before going to the next level you will find a vendor that will allow you to spend some of the money you have been collecting on pets, armor and even more passives.

After the third arena of a zone there will be a boss battle waiting for you on the other side of the vendor location and these are very fun battles with patterns to memorize and over come. That is, if you have managed to get a good combination of items and abilities by then because if not they will mess you up, it’s a roguelike and is all randomized. 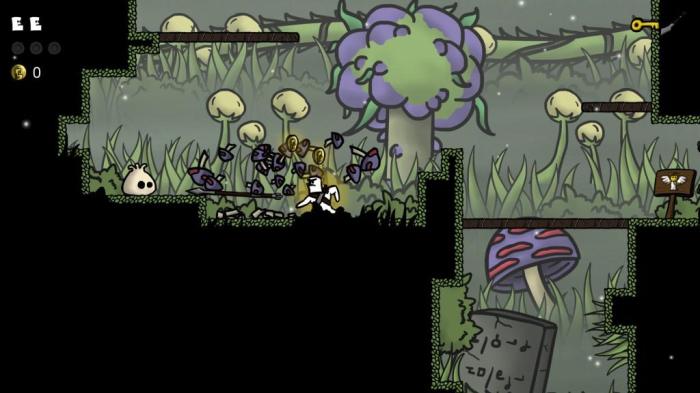 There are a total of 6 characters currently in the game that all have their own positives and negatives such as the Patato not being able to wear armor but having it convert to healing instead or Babouk being capped at 3 max HP but starting with a very high vampirism. Robbie for example has a very small hit box but has no arch on his attack so it has to aim directly at the target and is a pain to play in my opinion. It really comes down to your preference but I recommend experimenting with all of them.

When you die and will die, you will lose everything you’ve amassed in that run but will gain some experience towards leveling the character you were using in order to unlock up to a total of 5 additional passive bonuses. They don’t make or break the game but are a nice incentive since beyond that your only head start to a run will be a few random items that you are met with on the first room.

Need me to say something negative? Well the music and sound effects are good but for a game that is meant to be played so many times over it lacks enough variety to not get tiring after the first handful of hours.

If you haven’t guessed already, I strongly recommend Space Gladiators and that’s not even taking into consideration that at the time of this review it is still in early access and is only around 10 bucks. If the full release means more rooms, enemy types and so forth, it will only become an even better offering.