Smart level design, beautiful scenery, tight gameplay mechanics and a consistent challenge make Mortal Shell the most polished Soulslike I have yet played. The game knows what it wants to be, and by all indications they accomplished it perfectly. While there are design decisions I do not enjoy, their intended execution is as close to flawless as any of the top games of this era.

The game plays very similarly to many others in the genre, with its main differentiating mechanic being evident right in the name. You take on shells of four classes, such as a tank who has very high health but has low stamina meaning he can only get off a few attacks at a time and dodges poorly, or a thief with barely any health who can string together long combos and rewards those keen on avoiding attacks. There is no shield, but you can completely become immune to attacks by using a skill called hardening, which has a short CD and generally only blocks one big hit. It also can be used at almost any time, even mid swing, which can be a great way to get in damage when facing very aggressive foes.

There is no traditional leveling, instead you earn new skills for these shells, making them more like a load out. For example, the one I played most of the game with, the thief, had a skill that made his blades poisoned that triggers the moment you kill something and is lost if you take any damage. This learning of skills does make you more versatile, but at beginning of the game and by the end I still could take the same number of blows. There is no way to simply outlevel content or get past a difficult part by spending some time powering up, if you want to complete something your option is to learn the mechanics of the fight and how to best utilize your own toolset, and early foes do not become easier only more familiar. You do, gradually, get upgrade items for your four weapons as well from set treasures, one of which does boost damage done, but ultimately the main thing you are going to need to rely on is yourself.

Do you accept a few hits getting through and be the tank, play something more rounded or rely fully on your ability to read telegraphs and dodge them on the fragile thief? A small array of items can supplement, some of which heal, some of which empower your parries, even one which allows you to regain the second chance mechanic- an ability which permits you to die once, sending you from your shell and letting you regain it provided you do not die. You are quite weak in this form, like a snail without a shell, but it allows you a second healthbar and there are even skills related to it. Items have their own unique system too, where you learn more about them and they become stronger or even change use once you’ve used them enough times, and proper use of them can sway tough fights. Though, you may dismay if you reach a particularly rough boss and realize there’s no estus flask that replenishes, leaving you very limited on healing items. Thankfully, healing mushrooms spawn in many areas on timers but there’s a definite difference between going into a fight with ten of them or only two.

While the lack of replenishment of adequate healing items will likely be the most common point of frustration for players, the game ultimately rewards you for persistence and mastery of the tools you are given. I went to a zone with a frost boss first, and perished many times before finishing it. The boss had a mechanic that normally would be quite cheap, turning invisible and teleporting before rushing across the room. Generally, one would have to rely on blind dodging to avoid such a thing, but the hardening ability allows you to counter it, and there were many examples in the game where the unique skills given to you could be utilized to specifically handle a foe. This leads to almost no point in the game where I thought that something was straight out cheap outside of perhaps the abundance of enemy clumps in a zone made up of walkways and deadly falls. Generally, if I died it felt fair, and for me that is the absolute pinnacle of a good soulslike- hefty challenge that makes you feel like you are responsible for your failures.

However, once the smoke cleared and I’d managed to beat that first boss, while the rest of the game felt rewarding and forced me to keep to that level of play, it also felt like everything else was trivial. Since there was really no further growth, once able to prove you could do it once you could do the rest of it and afterwards everything else was a one shot. The challenge only rises until you’ve beaten a full level and escaped it, at which point it flatlines for the rest of the game, or in my case as I believe I picked the hardest boss first actually diminished.

The world itself does grow more dire though, which is a fun experience in itself. As you go deeper into the game the zones, though few, become more difficult as well as get a visual make over. Right away the game is beautiful and dangerous, capturing a sense of danger around every corner, concealing treasures and traps as well as skulking foes, so later on finding them in an even more sinister state makes backtracking feel less like doing something over and more like exploring again, and with this challenge comes new rewards. It only solidified a feeling that everything in the game was carefully thought out and crafted, even with a fairly small selection of areas and foes, and they utilize what they have to a degree that could outclass games with double the assets. 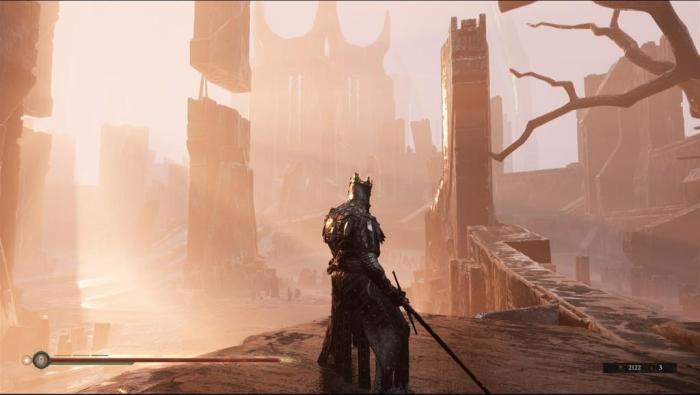 There are a few things that, while not flaws in the sense of the game itself, may be less appealing to some players. While graphically beautiful, the aesthetic is a bit mundane, almost all foes are relatively humanoid and this is generally a game about tight melee combat, with range being severely limited. There is no coop or pvp, this is a solo game which of course is perfectly fine, but for myself and others this is a pretty big limitation and I will admit, while I thoroughly enjoyed my playthrough of the game, the moment I beat it I lost interest, something that might not happen with multiplayer. It is fairly short, I dawdled a great deal and spent a fair bit of time on the one boss that challenged me and it likely took fifteen or so hours, but I guarantee a more focused player could beat it in half that- again, I do not think that is a huge issue especially since it’s a budget price game, but it is something to be aware of.

It is a game with a fairly high difficulty level, albeit a reasonable and fair one. However, because you cannot level up or coop in the game it does mean players may reach a point where they simply cannot continue. There are a few annoyances in game design too, two of the bosses would do wonky things to the camera angle, I actually had to fight the one boss without targeting him at all because his vertical movements would constantly force the camera to shake wildly or even go under water, and I would never consider bad camera work to be a legitimate part of a game’s challenge. There is also a mechanic called resolve which lets you build up to perform special attacks like adding fire to a weapon, kicking a foe or performing a parry that restores your health, this is in theory an extremely cool mechanic. However, resolve builds painfully slowly making these cool abilities largely a nonfactor, and I think the already solid movesets of your weapons would be made even better if you could use these more often.

Overall though, this game is polished, pretty and challenging. Controls are solid, the minimal story and direction gives you freedom to go wherever you choose and just explore a deadly land, and you are rewarded for learning to play the game rather than grinding experience or loot. The few things I find lacking, such as no coop, are things that will appeal to people on a personal preference basis, and in terms of overall design as mentioned the game is close to flawless. It does not necessarily bring anything new to the genre, instead refining and focusing on a tight melee centric game that does not need to balance for range or magic, but if this is what you are looking for there is almost nothing I can recommend more for you beyond the original Souls games themselves. While personally not my favourite in the genre, as I prefer leveling, coop and magic based builds, I can fully recognize the quality of this game and its greater appeal. I also appreciate that I was able to lure very few enemies into jumping off cliffs.