I don’t play mobile games, not due to their quality but as Blizzard likes to point out I’m a pleb without a fancy intelligent phonicular device. Not that they sound overly appealing, an entire genre of low effort, repetitive microtransaction stores with something similar to a game hastily built around them. The simplicity of the ones that I’ve played which have come over to consoles generally hasn’t impressed me, while the monetization schemes and hyperfocus on time consuming and gated content which saw huge success on mobile platforms then spread like the plague to the console franchises I love is nothing short of rage inducing.

Needless to say, I had zero interest in Genshin Impact when it first came out, but having very limited funds the free to play aspect of it made me realize that the moment it started to bore me I could leave and lose nothing. Well aware that these games tend to be built to be extremely unenjoyable unless you open your wallet, I wanted to see if I could play the game for a full month without spending a dime and still have fun, with the full expectation that I would not last before the game bored me.

My expectations for the game were shattered basically instantly, and my month of playing a free to play game for free ended considerably differently than expected.

What surprised me at first, being someone completely new to Gatcha games, with very low interest in sprawling massive open worlds and with fairly well founded expectation of simple controls and basic graphics, was basically everything.

Immediately the landscape is clearly beautiful, the controls are not only good for both combat and exploration but notably better than just about everything I’ve played. It is so easy to move around in the world, to climb, to dash, to glide that I never found myself getting frustrated when trying to reach something but still enjoyed getting to it.

The combat is fast paced with an easy to use control scheme that gives you a great deal of control over how you want to play, each hero has their own quirks and combining attacks feels rewarding. The most notable part is the elemental system, where every hero has their own element with fairly standard strengths and weaknesses that can be used to deal extra damage or break down opposing elemental shields, such as using water on a fire mage. Abilities synergize, as well as are enjoyable to combine as you can use elemental attacks from multiple characters to cause debuffs or explosive damage, or even combining them with things in the world. For example, if it is raining the hydro status is constantly applied which amplifies lightning, blasting fireballs at a patch of grass will burn everyone standing nearby until the grass blackens. 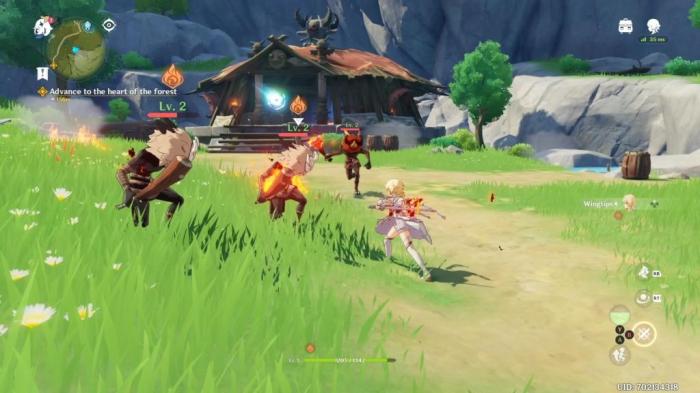 This also helps ensure all enemies in various combinations can be dealt with, or threaten you in different ways. Archer foes with elemental arrows may seem weak alone, but a frost archer and a water mage together can stun you by combining the elements to freeze you solid. Ensuring your team can both dish out elemental bursts and handle the elements of foes ends up being a very strategic part of the game, though you are eased into this and can spend a considerable amount of time enjoying the game without giving these dynamic features too much thought.

This is very much a game anyone can play, casual or hardcore, skilled or new, and find themselves with content at their personal pace no matter how long they play.

The beauty of the world lends well to exploring it, puzzles and treasures are frequently and cleverly strewn about, always rewarding you for checking on something that looks a little off and providing all the hints you need in the area to solve them. Several puzzles require use of elemental abilities, the most notable of which being fire to light torches, but almost every element is used within the first two zones. Aside from simply being well designed to blend naturally into the world and reward exploration, they give you free characters that are perfect for that.

If you end up spending a bit of time you can likely find guides on which heroes are best for you, and even without them the moveset of the first hero to join your party, an energetic fire archer named Amber, starts to feel a bit weak in combat. I imagine once you reach the highest level dungeons and combat challenges, a process that may take months and hundreds of hours, you may see few if any of the top guides will have Amber in the party.

However, at that point you will have far more heroes even if you do play completely free. For the first significant chunk of the game the biggest thrust of what you will do is exploration, and the heroes they guarantee you for free at the start are some of the best heroes for that, which I consider to be very thoughtful and smart design.

Not only are elements needed for exploring covered, but Amber’s fire arrows and timed bunny bomb are amazing for handling the bulk of early puzzles, she can manage early shields and combines well with your main hero’s initial wind element to spread flames and even create fire tornadoes, and the explosive nature of her bomb also does damage to certain tough obstacles like giant rock shields, mining nodes and stone coated chests. While most free to play games tend to create problems then sell you the solution, it genuinely feels like every obstacle in the game can be overcome no matter how much or little you spend. 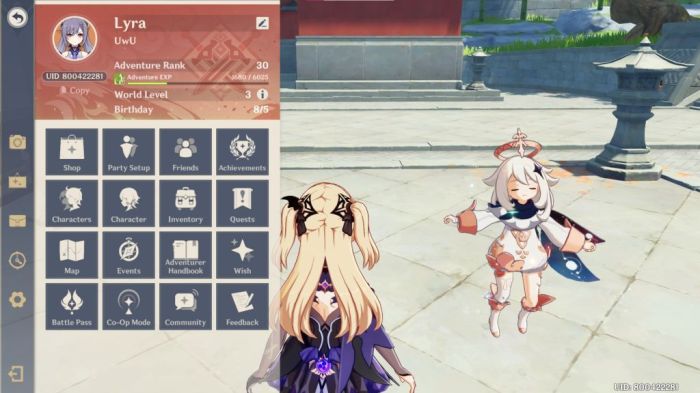 Enemies are just as varied as the heroes you can obtained, with their own strategies and reactions. Slimes of every element are a pretty fantastic example of this as each of them has a personality based on element. Grass slimes for example like to hide, but scurry away in terror if set on fire. Knock an air slime off a cliff and it’ll float down. Some slimes shield themselves with their element, such as earth slimes which are slow and sturdy, or fire slimes that will be very aggressive but if put out by water become far shyer. Enemy casters create pillars for archers to stand on making it hard to deal with them, or create twisting mazes of thorns to force you to move very cautiously or risk harm. Enemies are largely social, living in camps though a few solitary foes will wander about, and slimes tend to like places abundant with their element, especially when they can take advantage of it such as ice slimes turning rivers into slippery platforms.

Heroes of course are the main focus of the combat aspect of the game, as well as the gatcha system. You do get several free, and it is very easy to get all the lower tier four star heroes without spending any money if you play long enough. While the five star heroes can be a bit absurd in their drop rates, and tend to be extremely good, I do not feel at all that they are necessary, and some of the lower tier heroes are just as good or combo extremely well with others. Heroes are, or will be in the future, introduced with short quest chains, or interweaved with the main storyline. They each have vibrant, distinct personalities which is very anime in feel, generally being quite charming. The visual design is also top notch, and that’s evident even immediately with Amber, your first free character, and all the little details in her outfit including her dancing bunny bomb and the adorable ribbon which resembles bunny ears. Every hero looks and feels unique, and while there’s a few like Amber who could use a bit of tweaking to how her abilities work, it does not feel like the lower tier heroes are third class assets in gameplay or visuals despite being cheaper or free, which generally would be something I’d expect in a free game.

The game largely respects your time. There are limits on certain activities, but you can target specific upgrade items or pieces of gear. The daily quests feel a bit standard, but there are enough of them that some I’ve encountered only once or twice. It is also very generous with both currency to attempt to get more heroes, and even has given out a few heroes for free since launch with events, and good ones, my main party of four at the moment actually consists of three such heroes.

Genshin Impact has so much to do and see that I still have a fair chunk of the second zone to explore and they’ve added a decently sized third zone, there’s no paywall on exploration which has enough content to rival any full priced game, and you can definitely get very far in the endgame without any money or good luck. After a single month, I’d gotten far more content and time spent for the cost of zero than I do on most AAA titles, not spending money has not decreased my enjoyment of the game, and I can honestly say if I’d bought this at the new industry standard full price I would not have regretted the purchase. 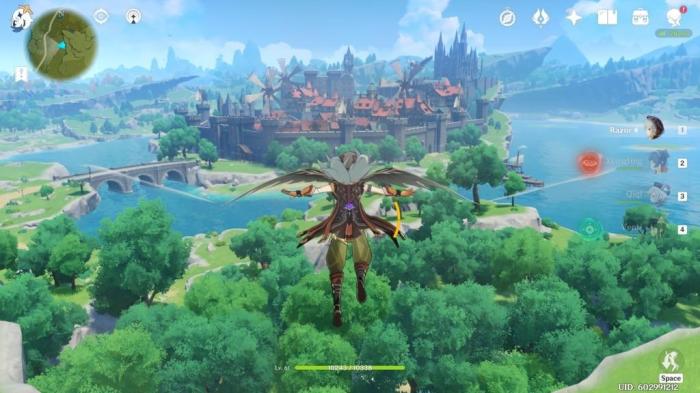 For a game that basically checks off every box on my things I hate about games list; the beautiful scenery, rewarding exploration and dynamic combat along with lovable characters and deep lore that has so much room to expand have genuinely surprised me. Running into almost no bugs, another surprise for such a large game, this game is truly one of the gems on the PS4. To make it even better, content is regularly brought out both large such as a new boss or small like frequent mini events such as a recent gliding challenge. It does not stop there though, as many small changes have been made due to community feedback showing they are willing to listen, but best of all most of them were aimed at problems that were more considerable for free to play players.

Of course, the gatcha system itself is one that I think most players will not like, I cannot recommend the game to anyone who has gambling issues, and I think the value you get from buying gems is particularly awful. You do not need to spend money on the game, and if you do the 5 USD subscription like purchase rewards you far more per dollar, along with a lot of patience, than buying the bulk gems. I’d strongly advise against watching so called whale streams which spend thousands on gambling. Keep in mind many of these are being paid or getting large donations, and to them this is not gambling but an expense. In much the same way as you would not go spend two grand on stacks of paper, but the company you work for might- the earlier is most likely a clear bad idea, while the latter is just a natural part of business that will net a profit.

My free to play, no research done experience with Genshin Impact has left me extremely satisfied, the amount of joy I had from playing this game is something I haven’t felt since Twilight Princess and Link to the Past, and climbing, gliding and exploring this world has made me eager for more. I’ve continued playing long past that initial month, and this is still one of my favourite games. It even has easy to use multiplayer.